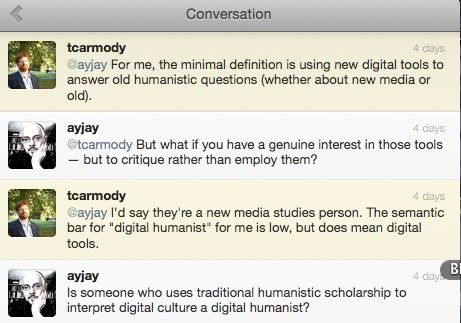 So I was having this conversation on Twitter the other day. I asked the question because I was thinking about Marshall McLuhan, about whom I am writing an essay that will (God willing) appear in a future issue of The New Atlantis: I was wondering whether it would make sense to call McLuhan a digital humanist. If Tim is right in his response, and I think he probably is, then McLuhan is actually the opposite of a digital humanist. If the digital humanist uses new tools to analyze old texts (and other media), McLuhan used the old tools of (a) early modern rhetorical analysis and (b) modernist literature and literary criticism to analyze new media. It was McLuhan’s core conviction that if you want to understand contemporary audio and visual media, from radio to billboards to television programs to comic strips — McLuhan was especially fascinated and appalled by Dagwood Bumstead — your best tools derived from historians of ideas (Eric Havelock), literary historians (John Hollander), anthropologists and ethnographers (Mircea Eliade), and contemporary novelists and poets (Ezra Pound, Wyndham Lewis, James Joyce).
What the world needs now, to coin a phrase, is someone with McLuhan’s commitment to humanistic scholarship who is also geeky enough to know the world of code from the inside.
(UPDATE: I forgot to say that you need to read those tweets from bottom to top. I should have Storified them before posting. Sorry.)

7 thoughts on “McLuhan the digital humanist?”