laptops of the Borg

What, yet another Borg-Complex argument for laptops in the classroom? Yeah. Another one.

Laptops are not a “new, trendy thing” as suggested in the final sentence of the article – they are a standard piece of equipment that, according to the Pew Internet and American Life Project, are owned by 88% of all undergraduate students in the US (and that’s data from four years ago). The technology is not going away, and professors trying to make it go away are simply never going to win that battle. If we want to have more student attention, banning technology is a dead end. Let’s think about better pedagogy instead.

Sigh. It should not take a genius to comprehend the simple fact that the ongoing presence and usefulness of laptops does not in itself entail that they should be present in every situation. “Banning laptops from the shower is not the answer. Laptops are not going away, and if we want to have cleaner students, we need to learn to make use of this invaluable resource.”

And then there’s the idea that if you’re not more interesting than the internet you’re a bad teacher. Cue Gabriel Rossman: 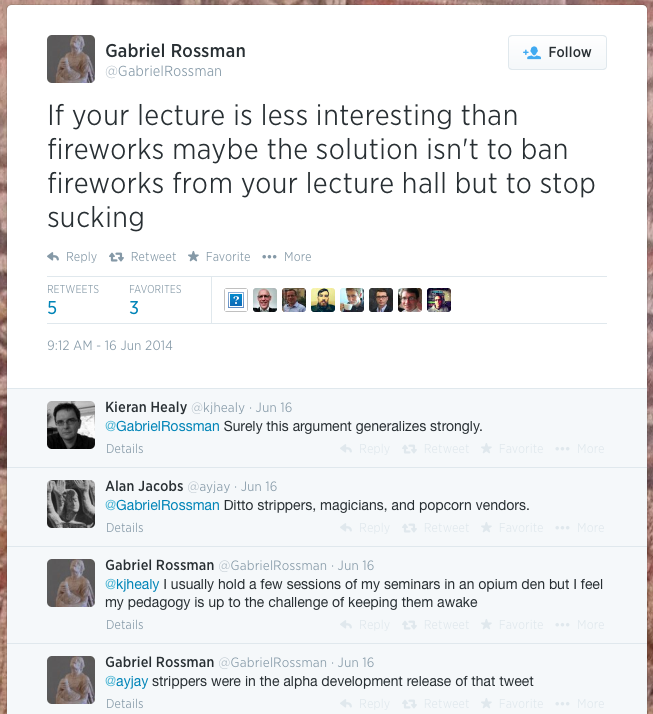 Honestly.
Robert Talbert, the author of that post, assumes that a teacher would only ban laptops from the classroom because he or she is lecturing, and we all know — don’t we? —that lecturing is always and everywhere bad pedagogy. (Don’t we??) But here’s why I ban laptops from my classrooms: because we’re reading and discussing books. We look at page after page, and I and my students use both hands to do that, and then I encourage them to mark the important passages, and take brief notes on them, with pen or pencil. Which means that there are no hands left over for laptops. And if they were typing on their laptops, they’d have no hands left over for turning to the pages I asked them to turn to. See the problem?
I’ve said it before, often, but let me try it one more time: Computers are great, and I not only encourage their use by my students, I try to teach students how to use computers better. But for about three hours a week, we set the computers aside and look at books. It’s not so great a sacrifice.

3 thoughts on “laptops of the Borg”