In 1817, Dr. James Parkinson, an English surgeon, scientist, and political activist, wrote in An Essay on the Shaking Palsy about a new medical pathology. In this work, he describes the characteristics of what would later be called Parkinson’s Disease (PD). The essay is worth examining because it offers a perspective on a disease that we see quite often — PD is one of the most common debilitating neurologic disorders today, affecting about 1 percent of people over sixty. 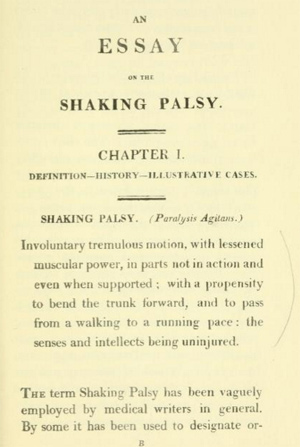 Parkinson set out to characterize the illness by doing what a scientist ought to do, observing and taking notes:

The disease is of long duration: to connect, therefore, the symptoms which occur in its later stages with those which mark its commencement, requires a continuance of observation of the same case, or at least a correct history of its symptoms, even for several years.

The onset of PD is extremely subtle; its initial symptoms are “slight and nearly imperceptible.” Nevertheless, patients generally experience a sense of weakness and a minor unilateral hand tremor at rest (the typical tremor is exhibited in this video). Soon, “the morbid influence is felt in some other part,” perhaps the leg on the side of the affected hand. Other symptoms arise over months to years, too, making precise manipulation, for instance when writing, more challenging:

As the disease proceeds, similar employments are accomplished with considerable difficulty, the hand failing to answer with exactness to the dictates of the will. Walking becomes a task which cannot be performed without considerable attention. The legs are not raised to that height, or with that promptitude which the will directs, so that the utmost care is necessary to prevent frequent falls.

In addition to falling frequently, patients’ handwriting shrinks in size (this is known as micrographia); they experience difficulty sleeping and increased severity of tremors (eventually affecting both hands and both legs); the disease even alters speech, causing patients to speak softly (hypophonia); and uncontrolled drooling occurs along with increased muscle rigidity. Patients often feel frozen in space, trapped by the inability of their muscles to obey their commands.

Parkinson describes the last stages of the disease as follows:

The chin is now almost immoveably bent down upon the sternum. The slops with which he is attempted to be fed, with the saliva, are continually trickling from the mouth. The power of articulation is lost. The urine and fæces are passed involuntarily; and at the last, constant sleepiness, with slight delirium, and other marks of extreme exhaustion, announce the wished-for release.

And yet, despite Parkinson’s detailed knowledge of the disease course, there was no real indication as to the etiology or pathology of it. One can sense Parkinson’s frustration with the ignorance of the scientific community:

As for “the means of cure,” Parkinson writes, “nothing direct and satisfactory has been obtained.” Indeed, he proposed a treatment that seems absolutely bizarre to us today: drain blood from the upper part of the neck. One theory held that the disease came from irritation of the theca, a covering of the spinal cord, leading to inflammation and pressure. According to Parkinson, draining the blood could release that pressure and mitigate symptoms.

Though this treatment amounted to very little, Parkinson does conclude his work with some hope:

There appears to be sufficient reason for hoping that some remedial process may ere long be discovered, by which, at least, the progress of the disease may be stopped. It seldom happens that the agitation extends beyond the arms within the first two years; which period, therefore, if we were disposed to divide the disease into stages, might be said to comprise the first stage. In this period, it is very probable, that remedial means might be employed with success: and even, if unfortunately deferred to a later period, they might then arrest the farther progress of the disease, although the removing of the effects already produced, might be hardly to be expected.

Looking back at Parkinson’s essay with today’s knowledge about the disease, we can say that his descriptions are unusually accurate for a medical text that is two centuries old. In fact, many of the patients I’ve seen in clinic today with Parkinson’s disease have stories identical to those described by Parkinson. However, there are a few corrections that we need to make. First, Parkinson neglects to mention the dramatic changes in facial expressions among these patients — a practiced observer can pick out a PD patient merely by making eye contact.

I saw a seventy-year-old female in clinic with a new diagnosis of the disease. She had the classic hand tremor and muscle rigidity, but I remember her face the most. It was haunting. She rarely blinked and stared with the utmost intensity, not quite sure when to look away. That small social grace of breaking eye contact had been lost. The eyes peered, not vapidly, but creepily. They challenged you to speak or break the stare. The whole face seemed devoid of a crucial aspect of its human expressiveness. I noticed no smile or frown even when I joked around with her. Her expressions contained a strange mixture of repressed anger and stoicism. Facial signals, emotions, and features are dampened and even nonexistent in PD to a frightening extent. And imagine the emotional pain that comes with the knowledge that your face publicly separates you from everyone else.

Parkinson also did not know anything about the pathology of the disease. We now understand that the disease can be linked to the death of neurons. Specifically, neurons that release dopamine in the brain in the substantia nigra die off, leading to an overall reduction in dopamine in the brain. The disease causes symptoms after 80 percent of these dopamine-producing neurons are lost. Why this happens is still unclear — approximately 85 to 90 percent of the cases are idiopathic (meaning the cause is unknown) and 10 to 15 percent of affected patients have a first-degree relative with the disease (and we’ve identified at least some of the genes that are associated with PD). But there are interesting non-genetic factors that contribute to the risk for developing the disease. Pesticide exposure and the drinking of well water have been linked to PD (see for instance chapter 77 of the textbook Neurology of Movement Disorders by Haq, Foote, and Okun). And the use of tobacco, bizarrely, has been inversely associated with risk for the disease.

Thankfully, though, the treatments for PD have improved tremendously over the last few decades. Dopamine agonists and medications like carbidopa-levodopa stimulate dopaminergic receptors in the brain, freeing patients from their feelings of bradykinesia (slow movement) and rigidity. One patient I spoke with called his medications “a miracle.”

Deep Brain Stimulation (DBS) also dramatically improves patient’s symptoms. Neurosurgeons implant a thin electrical wire either in the globus pallidus internus or the subthalamic nucleus — two different parts of the brain — which then connects to a pulse generator. This generator sends electric pulses into the brain, and symptoms can change almost immediately. I clearly recall my first encounter with a patient who received DBS. In the exam room, the attending physician increased the voltage going through the generator and the patient’s tremor gradually decreased until it disappeared. It was absolutely incredible to witness.

There are, of course, side effects to these medications and procedures. Impulsivity is one that I have had a particular interest in: patients on dopamine agonists and with DBS can take up gambling, excessive shopping or risky sexual activity. Additionally, the medications can cause nausea, vomiting, dizziness, hallucinations, and constipation. The most serious side effects of a drug like carbidopa-levodopa are dyskinesias, which occur after long-term use. Dyskinesias are involuntary movements: patients writhe sometimes fluidly and sometimes suddenly. An arm shoots up in the air and is forcefully pushed down into one’s lap; the tongue hangs out of the patient’s mouth and licks the upper and lower lips; the lips smack together uncontrollably; legs kick. The patient seems to be possessed. Since these are uncontrollable, patients are not only forced to do things they don’t desire but are also faced with the stigma of their unusual behavior when they leave the home.

Dr. Oliver Sacks, the late neurologist, writer, and professor at NYU, describes one unusual method of dealing with parkinsonian symptoms in his book, Musicophilia. He observes the fascinating, rare, and still mysterious response a particular patient had to playing music:

If one walked her down the hallway, she would walk in a passive, wooden way, with her finger still stuck to her spectacles…. As soon as she sat down on the piano bench, her stuck hand came down to the keyboard, and she would play with ease and fluency, her face (usually frozen in an inexpressive parkinsonian “mask”) full of expression and feeling. Music liberated her from her parkinsonism for a time — and not only playing music, but imagining it. Rosalie knew all of Chopin by heart, and we had only to say “Opus 49” to see her whole body, posture, and expression change, her parkinsonism vanishing as the F-minor Fantasie played itself in her mind.

Even with all these treatment options, nothing halts the progression of the disease. Many patients I have met in the neurology clinic have had PD for almost twenty years, and their symptoms severely affect their lives. They have dyskinesias; their medications last for a much shorter period of time than they did years ago; they use a wheelchair; some of their voices barely rise above a whisper; and some have drool constantly leaking from the corners of their lips. Modern therapeutics hold the symptoms at bay for only so long.

But perhaps we, like Dr. James Parkinson, can hold out some semblance of hope. In an

article in the New York Times in February 2015, Jon Palfreman, a professor of broadcast journalism at the University of Oregon and author of the book Brain Storms, described his own experience with PD. He explains that one biotech company is now experimenting with genetically engineered compounds from viruses to neutralize specific proteins that build up in the brain and may be implicated in PD. This is a very interesting development and one that we ought to keep our eyes on. Clearly, we have come a long way from draining blood in order to treat PD. But we are also far from being able even to slow it down, much less stop it.

3 thoughts on “The Parkinson’s Patient”