Revisiting The House of God

Dr. Stephen Bergman, a psychiatrist, published his now-famous satirical novel The House of God under the pseudonym Samuel Shem in August 1978. The book’s protagonist, a young intern, describes the emotional and physical difficulties during the first year of residency. With more than two million copies sold, the work is something of a classic within the medical profession. 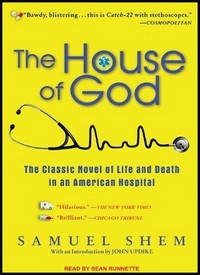 Even in medical school, before we started our clinical rotations during our third year, some of my friends and professors recommended I read the novel, so I borrowed it from a fellow student. I enjoyed it but couldn’t fully identify with the characters in the story, which dealt with the hardships of residency: terrible hours, unsympathetic attending physicians, obstreperous and ornery patients, horrible deaths, and flailing personal relationships outside of the hospital because of the amount of time spent inside it. As a student, I hadn’t yet seen these things and from the outside this all seemed unrealistic: How, I asked myself, could this even be close to the reality of a modern academic hospital?

Now that I am through my third and fourth years of medical school as well as my first year of residency I have re-read the book, and I thought it would be interesting to reconsider my initial impression. Indeed, the novel is so much more relevant to me now. In order to illustrate this, it is worth looking at just a few passages.

I got more and more tired, more and more caught up in the multitudinous bowel runs and lab tests. The jackhammers of the Wing of Zock had been wiggling my ossicles for twelve hours. I hadn’t had time for breakfast, lunch, or dinner, and there was still more work to do. I hadn’t even had time for the toilet, for each time I’d gone in, the grim beeper had routed me out. I felt discouraged, worn. (p. 41)

Though slightly hyperbolic, all this is scarily familiar to me. On some days there is so much work to do that one doesn’t really have time to sit down and eat. Or, when one does finally have a spare moment (after 6 or 7 hours of running around), animal instincts take over and without being cognizant of it one ravenously attacks any food available. Some of us stick granola bars in our white coat pockets to prevent this sudden and unfettered hunger attack but even this is just enough to make us want more. Occasionally, the issue is that one forgets to eat and when we smell the trays of food being delivered to hospital rooms during lunchtime, our intestines do somersaults, squeeze, shiver, and groan as we are reminded of our baser needs. We experience pangs of hunger that occur throughout the day because meals, and even glasses of water if one has time for them, are far apart. I have, in multiple instances, come home at night or in the morning and stood for a moment in the kitchen while having an internal debate with myself: Am I more tired or hungry?

And Shem’s line about the “grim beeper” made me laugh out loud. I remember twice walking into the bathroom to answer the call of nature, when suddenly the shrill sound from my pager or phone prompts me to abort the mission, walk out, and answer the other call.

The talk was, on the part of the doctors, all medicine….

The accuracy of this is stunning. When residents get together or when we have a spare moment to chat at work, we don’t usually talk about politics or friendships or relationships so much as we talk about medical stories. We trade tales of difficult procedures or illnesses or we tell hilarious medical jokes. Friends who spend time with us outside of the hospital are shocked at how much we speak about work with each other. But a resident’s life revolves around the hospital. We (almost) literally reside at the hospital and the eventful aspects of our lives usually occur in the healthcare setting. As one can see from even a quick glance at some posts on this blog, medicine is filled with human drama, humor, sickness, death, and life. How do we avoid talking about all that in our spare time?

The House of God found it difficult to let some young terminal guy die without pain, in peace. Even though Putzel and the Runt had agreed to let the Man With Agonal Respirations die that night, his kidney consult, a House red-hot Slurper named Mickey who’d been a football star in college, came along, went to see the Agonal Man, roared back to us and paged the Runt STAT. Mickey was foaming at the mouth, mad as hell that his “case” was dying…. Mickey called a cardiac arrest. From all over the House, terns and residents stormed into the room to save the Man With Agonal Respirations from a painless peaceful death. (p. 245)

These can be traumatic moments, indeed (I have written about coding patients here, here, and here). Shem’s point is that we in the hospital sometimes do chest compressions on patients we surely will not be able to resuscitate or, if they are resuscitated, will be dependent on a ventilator and unconscious for the remainder of their days. Do we try to revive a 90-year-old with metastatic cancer to the spine and brain? Or do we try instead to make the patient as comfortable as possible? From the patient’s side (and the patient’s family’s side) the difficulty, which seems insurmountable, is in accepting the end. For most physicians, like the narrator of The House of God, the difficulty lies in cracking ribs and sending electrical shocks through someone’s body with no clear purpose. In fact, we frequently ask families to let us make their loved ones comfortable, at least, before they pass away. But that is not always the decision that is made. And in the passage above Shem satirically chides those who believe the best course is always to be as aggressive as possible.

Eat My Dust Eddie, being run ragged in the death-house, the MICU [Medical Intensive Care Unit], looked awful, and was talking about his previous night on call: “I was admitting my sixth cardiac arrest and I got this call from the E.W. — Hooper, it was you — saying that there was a guy down there who’d arrested and you were thinking of sending him to me if he survived. I hung up the phone, got down on my knees, and prayed: Please, God, kill that guy! I was on my knees, I mean ON MY KNEES!” (p. 126)

My colleagues and I have never wished that anyone would die. But, undoubtedly, we all identify with the feeling of being overwhelmed. When you’re exhausted and still admitting patient after patient and trying to work them up for a new diagnosis while also taking care of other patients on the service, writing notes, fielding pages or phone calls from nurses, drawing blood, and doing CPR, there are moments when it feels as if there is no more time or effort left to give. You are working with rope with no slack or trying desperately to tread water. This is especially true in a place like the Intensive Care Unit, where patients are sicker and require closer monitoring. During those moments, we beseech the hospital gods: “please, no more admissions, please no more.” Or, “please don’t let anyone get sicker than they are.” It’s not every day one feels this way, but it is often enough that the sentiment is familiar.

When The House of God was first published it was not received well by Dr. Bergman’s colleagues and peers. As he tells it,

… my book The House of God enraged many among the older generation of doctors. I was maligned and disliked. The book was censored by medical school deans, who often kept me from speaking at their schools. None of it really bothered me, though. I was secure in the understanding that all I had done was tell the truth about medical training.

Thus, the book is not only a brilliant and witty piece of satirical literature, it is also a “fiction of resistance,” as Bergman describes it. Its most sinister and clueless characters are the ones in charge. And in many cases their worship at the altar of medicine and science damages their relationships with patients, residents, or each other.

Much has been written about this aspect of the book in recent years: Dr. Howard Brody of the University of Texas Medical Branch wrote about its relevance in the American Medical Association’s Journal of Ethics in 2011. Dr. Suzanne Koven, a primary care physician, interviewed Dr. Bergman about the book for the Boston Globe in 2013. Dr. Howard Markel, a professor of pediatrics, psychiatry, and the history of medicine at the University of Michigan, discussed the book in a piece for the New York Times in 2009.

The reason for this interest may have something to do with a story Bergman tells in his own 2012 piece for The Atlantic:

And then one day I got a letter forwarded from my publisher, which included the line: “I’m on call in a V.A. Hospital in Tulsa, and if it weren’t for your book I’d kill myself.” I realized that I could be helpful to doctors who were going through the brutality of training. And so I began what has turned out to be a 35-year odyssey of speaking out, around the world, about resisting the inhumanity of medical training.

But the culture in medicine has changed dramatically since this book was written. Institutions are far more humane than they once were. Nevertheless, what we see and how much we need to see cannot change. Doctors ought to be exposed to a wide range of pathology; they must be exposed to death. This is how one learns to be a great doctor, to diagnose obscure diseases, to treat common diseases successfully, and to save lives during a hectic code in the hospital.

No matter how authority figures treat residents, Bergman’s book will always be precious to future generations of doctors. Like any great novel it identifies common yet significant human experiences. The author tells us, as it were, that “yes, I know exactly what this is like and I laughed at the same things you did. I made the same mistakes. I had the same difficulties.” Such commiseration ameliorates that unsettling feeling residents experience: the feeling that the hospital is a rabbit hole that spirals into a detached and harrowing yet hilarious world. And, because of The House of God, there will always be a shared understanding among residents and readers of the triumphs and tragedies accompanied by this feeling.

One thought on “Revisiting The House of God”