Will it Blend?: Apples and Philosophy of Mind

If you’re studying geology, which is all facts, as soon as you get out of school you forget it all. But philosophy, you remember just enough to screw you up for the rest of your life. -Steve Martin
Anyone who sticks with a philosophy major long enough to take a philosophy of mind course will be familiar with some of the field’s classic thought experiments, typically involving zombies, identical twins, molecular clones, teleportation, amoeba-people, etc. And while these thought experiments can be quite useful for clarifying and constructing proofs about our concepts of mind, they are just as often used in fallacious attempts to destroy them.
Take the following scenario, a distilled version of one offered by Oxford professor Derek Parfit: Two molecularly identical copies of your body (including your brain) are created, and your original body is destroyed. Each copy thinks it is you, but which one really is? If one kills the other, is this suicide or murder? This experiment is supposed to prove that personal identity does not really exist, or at least that our understanding of it is illusory. Many similar arguments purport to dissolve related concepts such as selfhood and agency.
It should hardly need stating (but it does) that our concepts do not survive such scenarios because the scenarios are so wildly outside the realm in which those concepts arose. We shouldn’t expect personal identity to survive such violence intact. But we can’t draw from this gedankenexperiment the conclusions that Parfit proposes. Parfit’s aim is to prove that our notion of personal identity is wrong or unimportant, and that what really matters is psychological continuity. This attempt at conceptual demotion rests on the confusion wrought by the fact that some aspect of personal identity does survive in Parfit’s examples, even though related aspects, such as embodiment, do not. 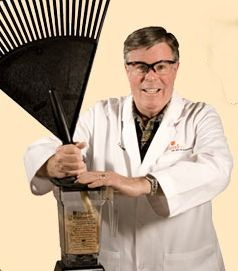 Consider another thought experiment: Take an ordinary apple, drop it in a blender, and hit “frappé.” Pour the results into a glass and take a gulp. What you’re drinking still tastes like an apple, and still has the same nutrients. But we can’t really call it an apple. Conclusion: apples do not really exist. Appleness is defined by those chemical components that survive the trip through blender.
Of course, the fact that an apple is destroyed when you put it through the blender doesn’t mean that our concept of the apple is illusory. The redefinition down to the chemical components is impoverished, missing traits such as texture, shape, viability in producing apple trees, etc. Moreover, the aspects of appleness that do survive the blender can similarly and just as easily be “proven” illusory.
This apple-in-a-blender thought experiment is comparable to Parfit’s. Just because neither personal identity nor the apple has quite the ontological fortitude of, say, the electron, doesn’t mean they do not exist. One conclusion to draw is that made famous by Wittgenstein, which is that our concepts depend on certain conditions, and we should not expect our concepts to remain intelligible in scenarios where those conditions do not hold.
But there is a related practical conclusion, too: If we want to maintain things like personal identity, selfhood, and agency, we should avoid situations where the conditions upon which they depend no longer hold. This is why we rightly consider people with brain injuries and certain mental illnesses to suffer some loss of these faculties, and why we work medically to heal them — not because the notions themselves have broken down, but because the patients have lost the necessary conditions for maintaining them.
And the same warning holds about the efforts to make realities of some of these wilder thought experiments: For example, it is certainly true that if Alice surgically swaps brains with Bob, each resulting person would have a partial but not complete claim both to be Alice and to be Bob, as Alice’s-brain-in-Bob’s-body would probably maintain aspects such as Alice’s original memory, but would inherit Bob’s bodily continuity, including Bob’s sex, the neurophysical influences of Bob’s body on personality and the attitudes that come from looking like Bob looks, and so forth. All this, however, is less an argument for why you don’t actually have personal identity than an argument for why you might not want to swap brains with another person.
(Thanks to Futurisms friend Brian Boyd, from whose paper “Derek Parfit is a Zombie” this post cribs rather immodestly.)

One thought on “Will it Blend?: Apples and Philosophy of Mind”