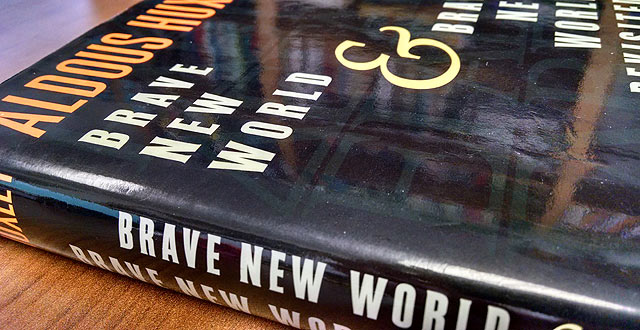 I was very happy to learn from George Dvorsky at io9 that Aldous Huxley’s novel “Brave New World is not the terrifying dystopia it used to be.” It’s not that the things in the novel couldn’t happen (more or less), but rather that they are happening and “we” have become much more enlightened and simply don’t need to worry about them anymore. The book is a product of its time, and our time understands these things much better, apparently.

Thus, the strongest condemnation Dvorsky can offer of the eugenics program depicted in Brave New World is that it is “disquieting.” But we can get over that. Genetic engineering techniques that might have once have been met with “repugnance” are now commonplace. Newer techniques which promise more control to make more things like those in Brave New World possible will have the same fate, Dvorsky expects, trotting out the number-one cliché of progressive bioethics: “While potentially alarming, these biotechnologies and others currently in development hold great promise.” And on the basis of that “great promise” we merrily slide right down the slippery slope:

Advances in genetics will serve to eliminate a host of genetic diseases, while offering humans the opportunity to forgo the haphazard genetic roll of the dice when it comes to determining the traits of offspring. A strong case can be made that it’s both our duty and right to develop these technologies.

The next non-problem Dvorsky sees in Brave New World is totalitarianism, which, along with “top-down” eugenics, he proclaims “dead.” Happy day! One might trust Dvorsky more on this topic if he did not declare that even in Huxley’s own time the book conveyed a “false sense of urgency” on this topic. But we now know that biotechnology will be “tools made by the people, for the people.” A case in point, I suppose, would be the drug company that just raised the price of one of its pills by 5000 percent.

And on and on. Concern about widespread use of psychoactive prescription and non-prescription drugs is, Dvorsky says, either “not entirely fair” or “hysterical.” On sex and the family Huxley’s “prescience is remarkable” but his concerns  are “grossly old fashioned and moralizing.” So too his Malthusian concerns are “grossly overstated” particularly when population control (apparently it is necessary after all) can be achieved by “humanitarian methods.”

So there you have it. It seems that for the advocates of technological “progress” and human redesign “don’t worry, be happy” has become a respectable line of argument. I know I feel much better now.