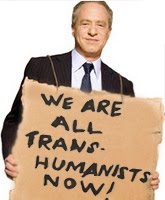 All we have to do is survive our embryonic stage, stay in control of our own destiny, and expand outwards in every direction at the speed of light. Ray Kurzweil makes this point in The Singularity is Near, a book that was #1 in the Science & Technology section on Amazon and [also appeared] on the NYT bestsellers list for a reason.

Ah. Well, if we’re going to use the bestseller lists as tea leaves, right now Sean Hannity’s Conservative Victory is on the top of the Times list, and Chelsea Handler’s Are You There, Vodka? It’s Me, Chelsea is #2. Does this mean conservatism and alcoholism have also already won?
Similarly, his other major piece of evidence is that it would be “hard for the world to give transhumanism a firmer endorsement” than making Avatar, a “movie about using a brain-computer interface to become what is essentially a transhuman being,” the highest-grossing film of all time. Okay, then surely the fact that the Pirates of the Caribbean and Harry Potter movies occupy five of the other top 10 spots means even firmer endorsements of pirates and wizards, no? And actually, Avatar only ranks 14th in inflation-adjusted dollars in the U.S. market, far behind the highest-grossing film, which, of course, is Gone with the Wind — unassailable evidence that sexy blue aliens aren’t nearly as “in” as corsets and the Confederacy, right?
Mr. Anissimov’s post at least contains his usual sobriety and caution about the potentially disastrous effects of transhumanism on safety and security. But he and other transhumanists would do well to heed the words of artificial intelligence pioneer Joseph Weizenbaum in his 1976 Computer Power and Human Reason:

The myth of technological and political and social inevitability is a powerful tranquilizer of the conscience. Its service is to remove responsibility from the shoulders of everyone who truly believes in it.

Keep Weizenbaum’s words in mind as we continue the Inevitability Watch. Humanity’s future is always a matter of human choice and responsibility.
UPDATE: Here’s another good example from Anissimov:

Transhumanist issues are obscenely mainstream nowadays, who even cares. We’re not even edgy anymore. The excitement is over. It’s time to start racing towards a safe intelligence explosion so we can end the Human-only Era once and for all. Let’s just get it over with.