The Myth of Libertarian Enhancement, Cont’d

Our recent post about libertarian enhancement has received some pushback. For example, commenter Kurt9 says he believes that “the highest moral value in the universe is to pursue one’s own happiness and love of life.” (He says that anyone who disagrees with him is engaging in “sophistry for totalitarianism” — his attempt at peremptorily ending all debate.) For Kurt9, a libertarian, pursuing happiness and love-of-life means super-longevity: “I want radical life extension (multiple 1000 year life span). I want to cure aging and get free of it. I fail to see why you should have a problem with this.”
This gives us another opportunity to discuss libertarianism and transhumanism. Consider: If he were to pursue radical life extension in strict accordance with libertarian principles, he would have to do so free from restrictions imposed by others and without in turn restricting the choices of others. This might be possible if he were a brilliant scientist living out in a solitary shack in the woods without contact with human civilization. 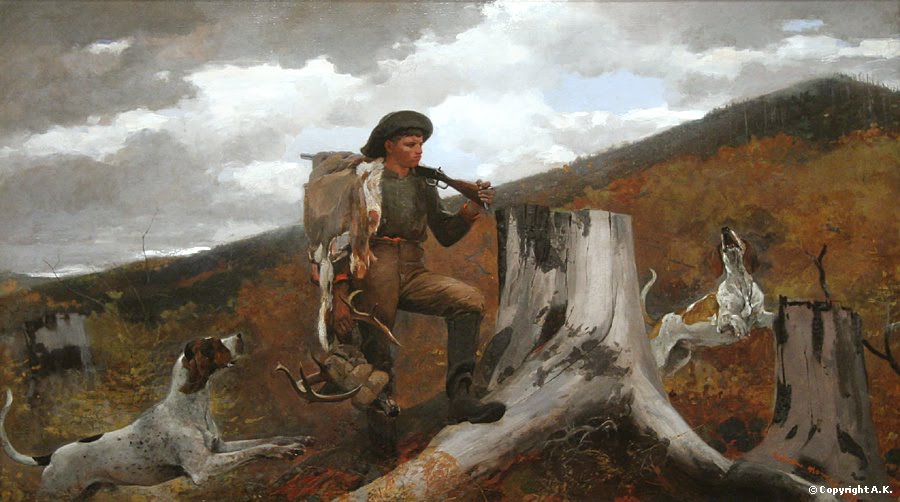 “A Hunstman and Dogs” by Winslow Homer. Courtesy WorldVisitGuide.But living alone in a shack isn’t usually conducive to major medical advances. The actual realization of our commenter Kurt9’s dream would require a society in which thousand-year lifespans were not just attainable but available to guys like him. That would be a society very different from our own. To put it simply, consider all the social, cultural, and economic changes that accompanied the doubling of human life expectancy over the last century and a half, and imagine the turmoil that would be involved in suddenly adding another nine centuries to the lifespan. The changes involved would be radical, complex, far from uniformly good or bad, and extremely difficult to predict beforehand.
This actually hints at a deeper truth connected to how we think about the future. All human beings live in a particular time and place. Moreover, all our choices and our ways of life presuppose a particular society, culture, and set of institutions in which they can be realized. However much fun it might be for fiction or for a thought experiment, in real life it makes no sense to talk about how “the world as it is now” will be different from “the world as it is now with the single modification that one individual can choose to live for a thousand years.” It is a meaningless proposition, as much a practical absurdity as it would be for an ancient Roman to insist that it concerns no one else if he wants to invent and drive an automobile.
The commenter Kurt9 also says that “We have no desire to impose our dreams and choices on other[s]. We seek only the freedom to do our own thing.”
This libertarian “freedom to do our own thing” implies that each individual should be equally free to pursue his or her chosen way of life no matter what that choice is, so long as no one else is harmed. Yet as much as you might not want to impose your own choices on others, it is an inescapable fact of life that our choices do impinge and often impose on others. Consider the old saw about liberty — that your freedom to swing your fist ends at the tip of my nose. But in real life, a guy flailing around with clenched fists is going to alter the behavior of everyone in sight. Or, to pick a different example, my neighbor’s choice to mine coal in his backyard obtrudes upon my freedom to choose to live in a quiet neighborhood with unpolluted groundwater and high property values. Or, to offer an example more relevant to some of our readers, your personal choice to develop an artificial intelligence that can write useful computer programs will impinge on my freedom to choose to enjoy a fulfilling and lucrative career as a computer programmer.
Libertarian transhumanists don’t really seem to be interested in protecting each individual’s equal freedom to do and be what he wants. Rather, they are interested in defending their own prerogatives to pursue their particular choices to enhance themselves without any cumbrance or criticism. But even this narrower and more solipsistic version of libertarianism will ultimately have to contend with the fact that as any given individuals gain powers — particularly powers of the sort that would be available to hypothetical posthumans — they will gain also the ability to exercise those powers in spite of and over others individuals in ways that will be far more difficult to prevent, stop, or even detect.
Liberty, rightly understood, does need to be defended. But we must also recognize that the image of liberty that some libertarians hold — epitomized by the iconic rugged frontiersman — depends on a self-reliance and self-constitution that are quite alien to today’s world. We are now more socially, politically, and technologically enmeshed than ever before. And while government tyranny remains a serious concern, there are other kinds of tyranny — including freely-chosen technological tyranny — that we should remain vigilant against.

9 thoughts on “The Myth of Libertarian Enhancement, Cont’d”