Late last year, Fred Baumann offered in the pages of The New Atlantis a depiction of the complicated relationship between humanism and transhumanism. It is a wonderful essay, and we will have more to say about it here on Futurisms before too long. Meanwhile, though, I noticed that the new issue of The Humanist magazine has a book review that touches on transhumanism, and I thought it worth a brief comment here.For those who don’t know, The Humanist is a publication of the American Humanist Association, a group with stridently anti-religious views. The twentieth-century humanist movement, of which the American Humanist Association is a part, considers itself a true heir to the Enlightenment. You can see this all over the group’s literature, which lauds science as “the best method for determining” knowledge of the world and “for solving problems and developing beneficial technologies.” Science can also “inform” our “ethical values.”I wonder if contemporary humanists have given much thought to the tensions between science and some of the other things they embrace. For example, I wonder what today’s vocally atheistic humanists would make of Joel Garreau’s article “Environmentalism as Religion.” And I wonder what they would have to say about the profoundly anti-human eugenics movement, which prided itself on its scientific rationalism but would seem to offer us a terrible warning about how scientistic ideology can trample on the “inherent worth and dignity” of human beings. (An old version of the humanist manifesto, dating back to 1973, did concede that “science has sometimes brought evil as well as good” — but the next version of the manifesto cut that bit.)A thoughtful humanist truly concerned with understanding and protecting human dignity might also want to ask some probing questions of today’s transhumanists. Is transhumanism the ultimate expression of humanism, or is it a kind of rejection of humanism? As far as I can tell, the only time anyone critically challenged transhumanism in the pages of The Humanist magazine was in a letter to the editor in 2004, and even that letter only barely touched on transhumanism.Which brings us to the book review in the new issue of The Humanist. Written by Jende Andrew Huang, it’s a review of The Techno-Human Condition, the new book by Arizona State professors Dan Sarewitz and Brad Allenby. Huang contends that the authors misunderstand transhumanism, but he doesn’t really explain what they get wrong — except to say that some of the “conversations [about the unintended consequences of human enhancement] that the authors are calling for are already happening in transhumanist circles.”Then, thinking that he is going in for the kill, Huang offers this:

Though it would almost be petty to harp on a single citation as an example of the authors’ thought processes, I was surprised to see them reference The Religion of Technology by David Noebel. Noebel is the founder of Summit Ministries, which, among other things, offers two-week summer sessions for Christian college students to teach them about five pernicious worldviews: Islam, secular humanism, Marxism, New Age, and postmodernism. As Noebel teaches it, the Christian worldview has fueled every great scientific advance and leap of knowledge in history, until Charles Darwin wrote On the Origins of Species in 1859, and scientists turned away from God toward both evolution and morality-free atheism, a shift that has since allowed society to run amok. It would be an understatement to say that most of what he writes cannot be assumed as objective or grounded in historical fact. Referencing Noebel as a reliable source on the thoughts and beliefs of seventeenth-century scientists is problematic, to say the least (though I suppose if we removed “applied reason” from the conversation, then we wouldn’t need to worry about letting facts get in the way of things).

Unfortunately for Huang, the entire premise of this paragraph is wrong. The book The Religion of Technology was written not by David A. Noebel, the minister Huang decries, but by the late David F. Noble, the Canadian historian and critic of technology. Huang thinks he has found a glaring problem with Sarewitz and Allenby’s approach to transhumanism, but the problem here is Huang’s own — and it’s a lapse that a few seconds of googling could have obviated.At any rate, we would be glad to hear if there are folks in the contemporary humanism movement who have doubts about the wisdom of transhumanism. Or does their faith (so to speak) in science run so deep that they are disinclined to question any project that seems as squarely scientific as the transhumanist project does?UPDATE — In case you were wondering whether the authors may have misspelled Noble’s name and thereby unintentionally misled Huang, here is a scanned in version of the paragraph on page 18 (at least in the advance galleys that I own) of Sarewitz and Allenby’s book: 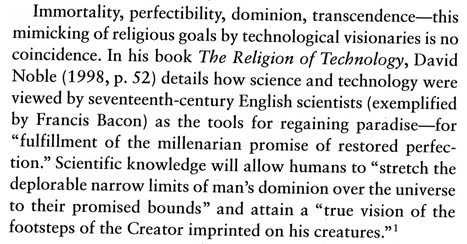 UPDATE II — Huang has e-mailed us the following reply to this post:

Thanks for pointing out my mistake! It’s especially embarrassing because I know “Doc” David A. Noebel, by virtue of having take one of his summer sessions at Summit Ministries when I was in college (you can read about my impressions here.)My time at Summit is one reason I highlighted the citation of what I thought was Doc Noebel’s book. I had done a quick web search and thought I’d “confirmed” that it was the Noebel from Summit. Clearly, I was mistaken. However, if you omit that paragraph, the rest of the review still stands. My comments regarding Doc Noebel are hardly the crux of my argument that you wish it to be. That paragraph was more like icing on an already delicious cake.I’m glad you’re reading (and hopefully enjoying) The Humanist magazine. After seeing your commentary about humanism, I would implore you to read the magazine with more of an open mind. Your characterization of humanism hardly befits the serious discussion I would assume your journal is trying to have about these complex issues. It’s unlikely you’d find many humanists willing to engage in serious dialogue with you about these topics, when you’re still questioning what humanists think about eugenics.

Clearly, I disagree with Mr. Huang about his review; I think that it did not seriously engage with Sarewitz and Allenby’s book, and that it did little to explain what they got wrong on transhumanism — but I will leave that to readers of the book, of Huang’s review, and of my post to judge.However, I would invite Huang, or any readers who consider themselves part of the humanist movement, to elaborate on the point Huang makes in his last sentence. What do humanists think about eugenics? I did a little googling before writing this post, focusing especially on the website of The Humanist and the American Humanist Association, and all I found was a glancing reference to eugenics as a “downside[] and absurd offshoot[]” of freethinking, and a blog post that in passing called eugenics “infamous.” I am happy to assume that humanists abhor eugenics, and I am happy to assume that they really care about protecting human dignity (a notoriously difficult term to understand and define). I just want to understand how they reconcile their appreciation of science as a source of knowledge and even ethical insight with the fact that it gave rise to the eugenics movement. The eugenics movement considered itself impeccably scientific, and its proponents used the latest scientific knowledge to justify their preferred policies. If there are books, essays, or blog posts by humanists that explain how they think through this problem, I would be glad to read and link to them.

One thought on “Humanist confused”