Sometimes, when we criticize transhumanism here on Futurisms, we are accused of being Luddites, of being anti-technology, of being anti-progress. Our colleague Charles Rubin ably responded to such criticisms five years ago in a little post he called “The ‘Anti-Progress’ Slur.”

In his new book Eclipse of Man, Professor Rubin explores the moral and political dimensions of transhumanism. And again the question arises, if you are opposed to transhumanism, are you therefore opposed to progress? Here, in a passage from the book’s introduction, Rubin talks about the distinctly modern idea that humanity can better its lot and asks whether that goal is in tension with the transhumanist goal of transcending humanity: 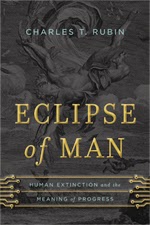 Even if the sources of our misery have not changed over time, the way we think about them has certainly changed between the ancient world and ours. What was once simply a fact of life to which we could only resign ourselves has become for us a problem to be solved. When and why the ancient outlook began to go into eclipse in the West is something scholars love to discuss, but that a fundamental change has occurred seems undeniable. Somewhere along the line, with thinkers like Francis Bacon and René Descartes playing a major role, people began to believe that misery, poverty, illness, and even death itself were not permanent facts of life that link us to the transcendent but rather challenges to our ingenuity in the here and now. And that outlook has had marvelous success where it has taken hold, allowing more people to live longer, wealthier, and healthier lives than ever before.

So the transhumanists are correct to point out that the desire to alter the human condition runs deep in us, and that attempts to alter it have a long history. But even starting from our perennial dissatisfaction, and from our ever-growing power to do something about the causes of our dissatisfaction, it is not obvious how we get from seeking to improve the prospects for human flourishing to rejecting our humanity altogether. If the former impulse is philanthropic, is the latter not obviously misanthropic? Do we want to look forward to a future where man is absent, to make that goal our normative vision of how we would like the world to be?

Francis Bacon famously wrote about “the relief of man’s estate,” which is to say, the improvement of the conditions of human life. But the transhumanists reject human life as such. Certain things that may be good in certain human contexts — intelligence, pleasure, power — can become meaningless, perverse, or destructive when stripped of that context. By pursuing these goods in abstraction from their human context, transhumanism offers not an improvement in the human condition but a rejection of humanity.

For much more of Charlie Rubin’s thoughtful critique of transhumanism, pick up a copy of Eclipse of Man today.