Final thoughts on the H+ Summit

Well, so much for liveblogging, but I wanted to share some final thoughts on the H+ Summit at Harvard that I recently attended.

The lineup at the summit included several dozen presenters over the course of two days, most given only ten minutes to speak. As a result, almost all of the talks felt rushed. Also, most of the speakers seemed rather unpracticed, and few were very focused or informative. There didn’t seem to be much of an overarching structure or purpose to the conference, and its “citizen scientist” theme ended up barely a footnote. There was both too much and too little going on to really engage the audience’s attention. 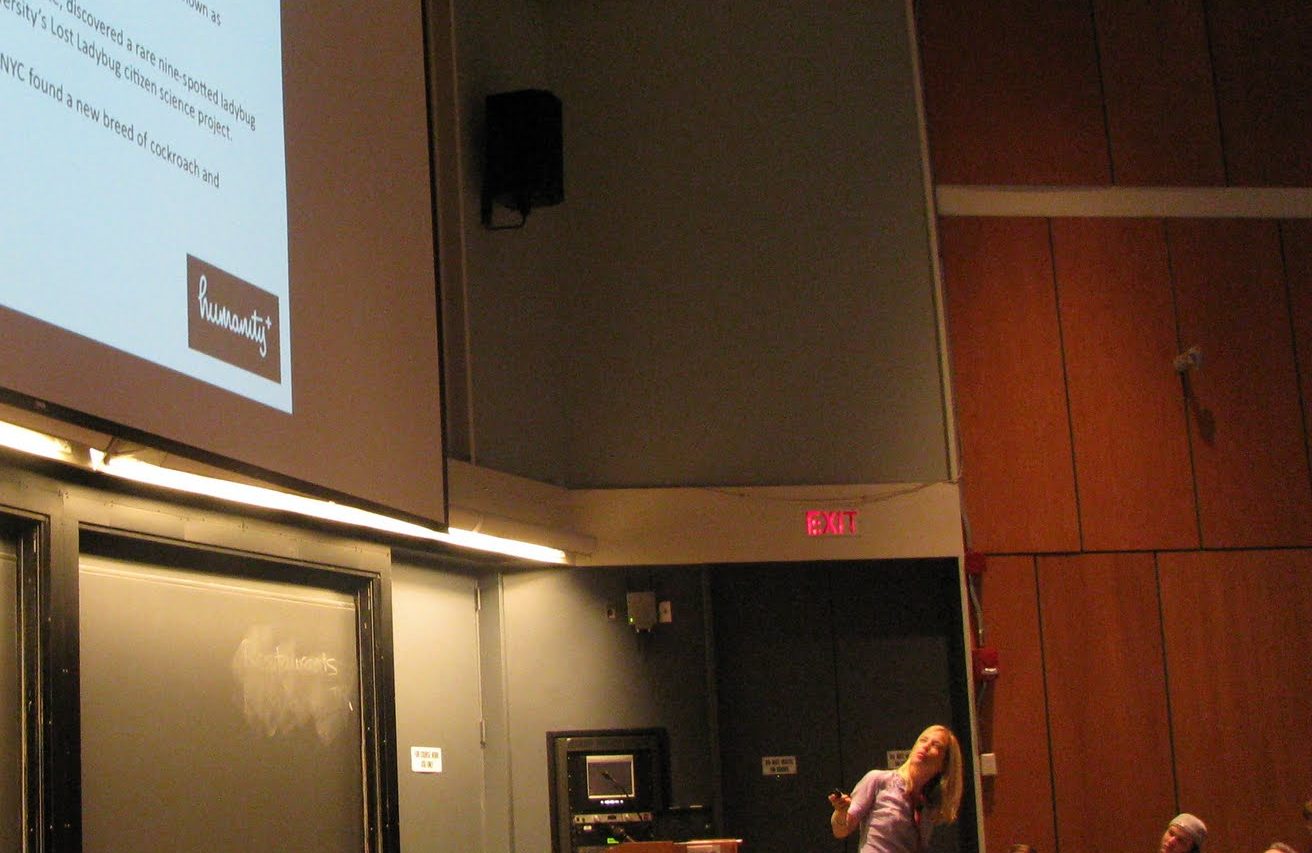 Whereas last year’s Singularity Summit had a clear eye towards grandeur and popularization, with better organization, longer, more focused lectures and a stronger sense of audience-presenter relationship, the H+ Summit had a very collegiate feel. While this could have worked to its advantage, it mostly didn’t. The conference was held in a college lecture hall, where the presenters stood almost directly beneath the slide screen and had to crane over their shoulders awkwardly to appear engaged with their slides. The lack of a stage further diminished the presenters. These factors combined with the overall lack of a focus made the proceedings feel rather like sitting through a series of informal college lectures by teaching assistants whom the students haven’t been given much reason to respect or pay attention to.
Moreover, because the proceedings were constantly running about twenty minutes late, every scheduled Q&A session was skipped. Every single one. The organizers had decided to have attendees submit questions solely via Twitter (a strange idea to begin with, considering that the conference was held in person and that some people had traveled quite a distance to attend) but even all of those Twitter questions went unasked and unanswered. Instead, audience members often took to shouting out comments at the presenters as they talked. This was mainly instigated by the person who did the most shouting — who, weirdly, I believe was Alex Lightman, the executive director of Humanity+ (I might be wrong that it was him, but it was definitely one of the organizers). He clearly meant it to be friendly, but given how rushed the presenters already were, these shouted interjections mostly had the effect of throwing them further off rather than creating a sense of audience participation, and I felt it led the audience to take the talks less seriously.

Organization of the talks

Among the other reasons for my sense that the audience didn’t take the proceedings entirely seriously was the large number of low-level presenters. A remarkable number of them gave talks plugging some small project or product of theirs, but attempting because of the context to force some sheen of larger significance on it. I talked to Kevin Jain, a conference presenter, and founding president of the Harvard College Future Society. He claimed that his group handled much of the organizing for the conference. If that’s true, the conference was actually quite an impressive logistical accomplishment for such a small organization (though it’s strange that the Humanity+ organization would put their name on it without doing the work themselves).
Jain said that the idea had been to try to open up the conference to include a wide variety of presenters, instead of just the usual luminaries. That’s a worthy goal, but in the future, the conference would benefit greatly from emphasizing quality over quantity, by choosing presenters and the lengths of their talks based on substance rather than the speakers’ reputations, and by more clearly separating big-picture talks from low-level project and research presentations. I would have liked to see a lot more time given to the likes of James Hughes, George Dvorsky, Patrick Lin, and Lauren Silbert to develop their ideas, whereas Stephen Wolfram and Ray Kurzweil would have benefited greatly from shorter time slots that forced them to focus their talks. Without naming any names, several of the other talks might have been safely left off the schedule until they were more well-developed. 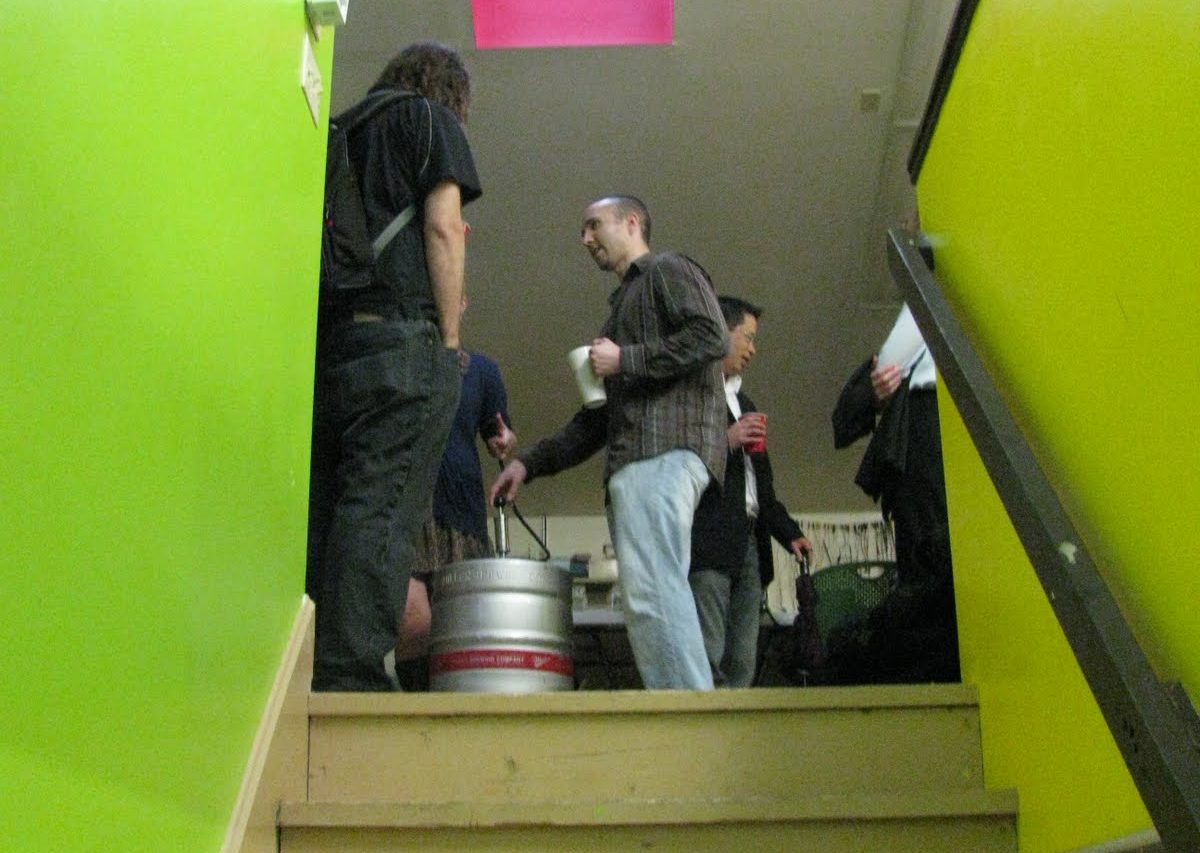 One way that the collegiate feel actually improved the proceedings was in the planned extra-conference activities. The most heavily promoted was a party held after the first day of the conference at a private off-site location, what appeared to be a converted-garage workspace for a small company. The place was a sort of paradise for a particular species of tech nerd of the Radio Shack variety, complete with a wide variety of electronics equipment for designing circuits, and whiteboards with diagrams of circuits and finite-state machines. And, best of all, there was a keg and plenty of cans and pitchers of beer, and, as David Brent would say, el vino did flow.
The party was packed with all manner of conference attendees, organizers, and presenters. I saw Ben Goertzel, Natasha Vita-More, Jessica Scorpio, and Patrick Lin hanging around. I talked to young Harvard undergraduates in the Future Society, who seemed to have joined more out of curiosity and excitement than a dead-set belief in a posthuman vision. 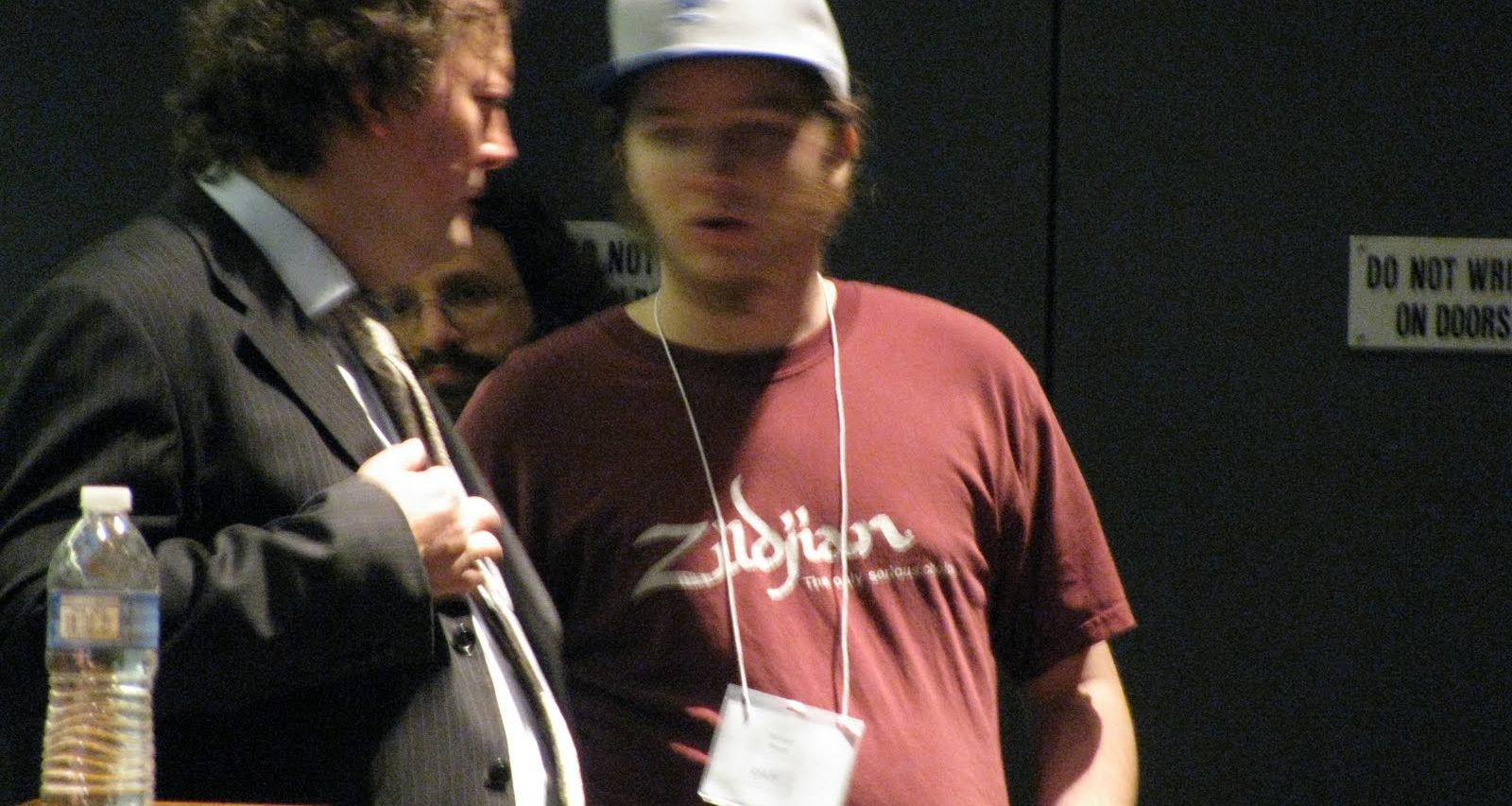 (One fellow I talked to, wearing a Zildjian cymbals shirt, had handled the sound equipment at the conference, and between the shirt and his constant running about on stage, he looked a bit like an H+ roadie.) I asked Aubrey de Grey how long it took him to grow his beard. Two years, he said, though that was a long time ago, and he fidgets with it enough that it’s reached an equilibrium where he doesn’t have to trim it. 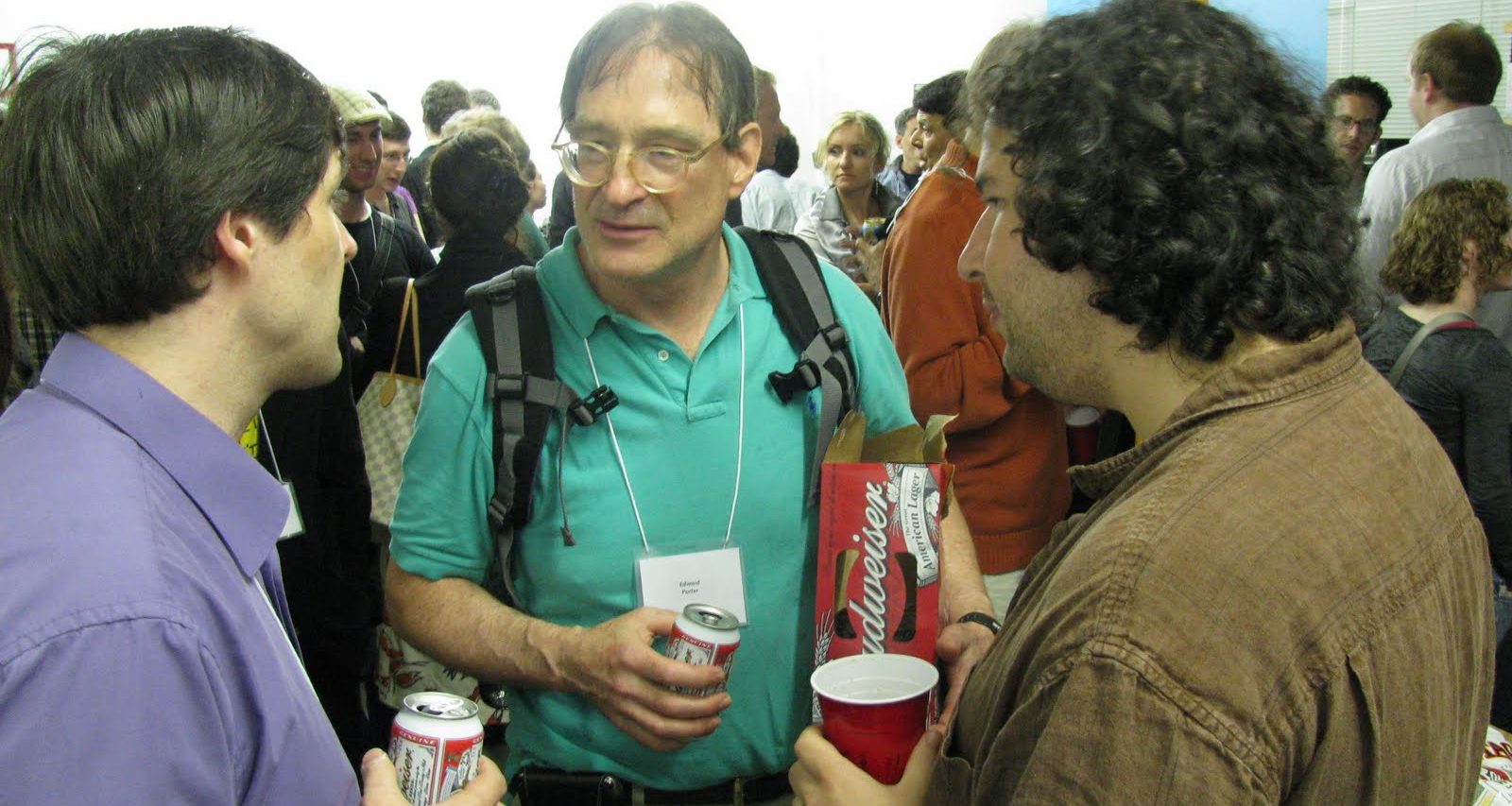 I spent much of that party in long conversations with a few people — presenter Ramez Naam and a smattering of other attendees who may not want to be named. (Naam amiably pointed out to me that I mischaracterized his talk in my post; see my update to it.) There seems to be so little common ground and so much mutual suspicion that these conversations can be difficult at first. But once I made it clear that not everything I say is a front for a secret desire to pass laws and regulations restricting other peoples’ freedom, I found that the conversations opened up remarkably.
Of course, it was still slow going in interrogating each other’s ideas and getting to basics, much less basics on which we might agree. I did arrive at two tangible if somewhat random agreements with two separate interlocutors. One converser and I came to agree that there might be value in not living in permanent pharmacologically-induced bliss. Another (Naam) and I came to agree that there are higher and lower ways of living, and in particular, that the life of Albert Einstein is a better sort of life to lead than the life of a person who simply eats ice cream, even if Einstein’s work had never been shared with society and so never benefited any other people. Hey, common ground! As Carl Sagan put it: small moves. 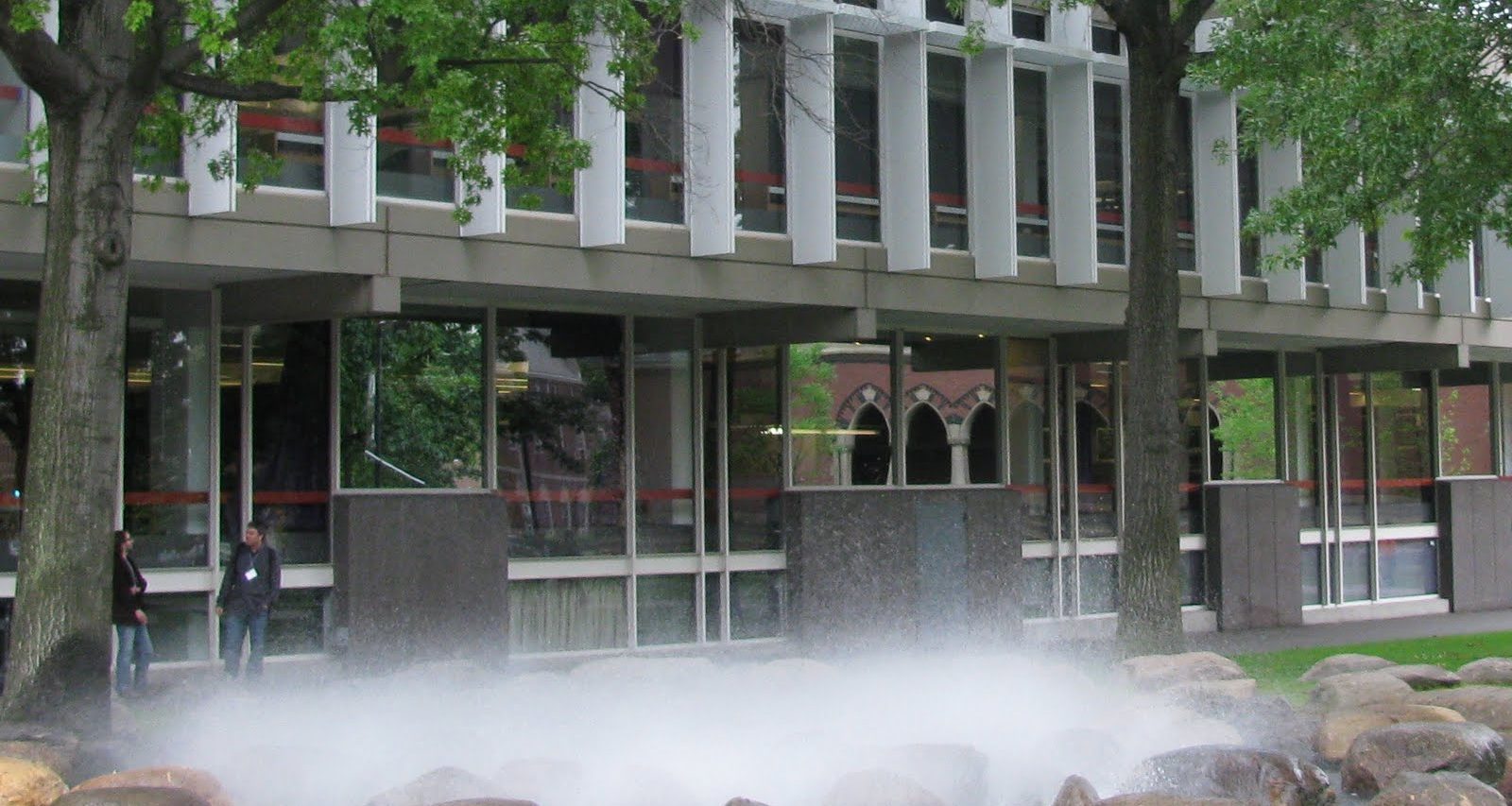 As struck me at last year’s Singularity Summit, all of these conversations reminded me of just how human are the transhumanists and their proceedings. Throughout all of this, I was struck by the contrasts between their pristine vision and the earthliness of their lives. There was, first of all, the mundanity of the conference itself. There was running into Ray Kurzweil and Aubrey de Grey in the men’s room. There was Kurzweil, spry and ruddy, his face part anticipatory, part fatigued, distractedly checking his e-mail as he stood a few feet away from me waiting to take the stage and deliver a speech that has clearly become routine. There was a conference organizer plugging his iPod into the sound system during a break and playing, of all lofty things, Fleetwood Mac.
There was sharing burritos, salads, sandwiches, and conversation at an Au Bon Pain over the lunch break with several conference presenters and organizers. When I noted how funny it was that we still had to take time at a transhumanist conference to eat, there was an organizer who agreed that, indeed, we still haven’t solved the problem of sustenance. (Don’t you like eating?, I asked. Yeah, he said, but I like learning and improving myself more, and I could be spending my time doing that.) There was watching conference presenters mingle about the beer party, looking with a hint of nervousness for someone to talk to. There was the sheer enjoyment everyone clearly took in interacting face-to-face with members of a movement usually connected only online, with hanging around someone’s cool workspace garage, munching barbecue and glugging beer and getting to talk to luminaries and leaders, and even being pleasantly surprised to discover that people they disagree with are nice and personable but just have different ideas.
Of course, these are all very ordinary human aspects of just about any conference. But the strange thing is that this particular conference and its attendees are devoted to doing away with this sort of humanity. Perhaps not all the conferencegoers — maybe some of them endorse only intermediate stages of enhancement. But the posthuman world of beings who don’t need to eat, drink, travel, engage in the trials of conversation, experience the peculiar anxieties and joys of attempting to know another person, or participate in anything that at all stinks of the everyday — that world is not one in which any of the experiences had at the conference could occur, or in which the concepts we use to understand them could even retain any coherence or meaning.
It’s hard to believe the conferencegoers and I could both inhabit the same world, both seem to discern the same pleasures in it, and yet they want it to end. There are greater joys to be had, I know they will say, over the horizon — a grab-bag of every fulfilled wish you could dream of. But it’s hard to believe they really understand clearly what those are, and just what it would and wouldn’t be like if they got them. 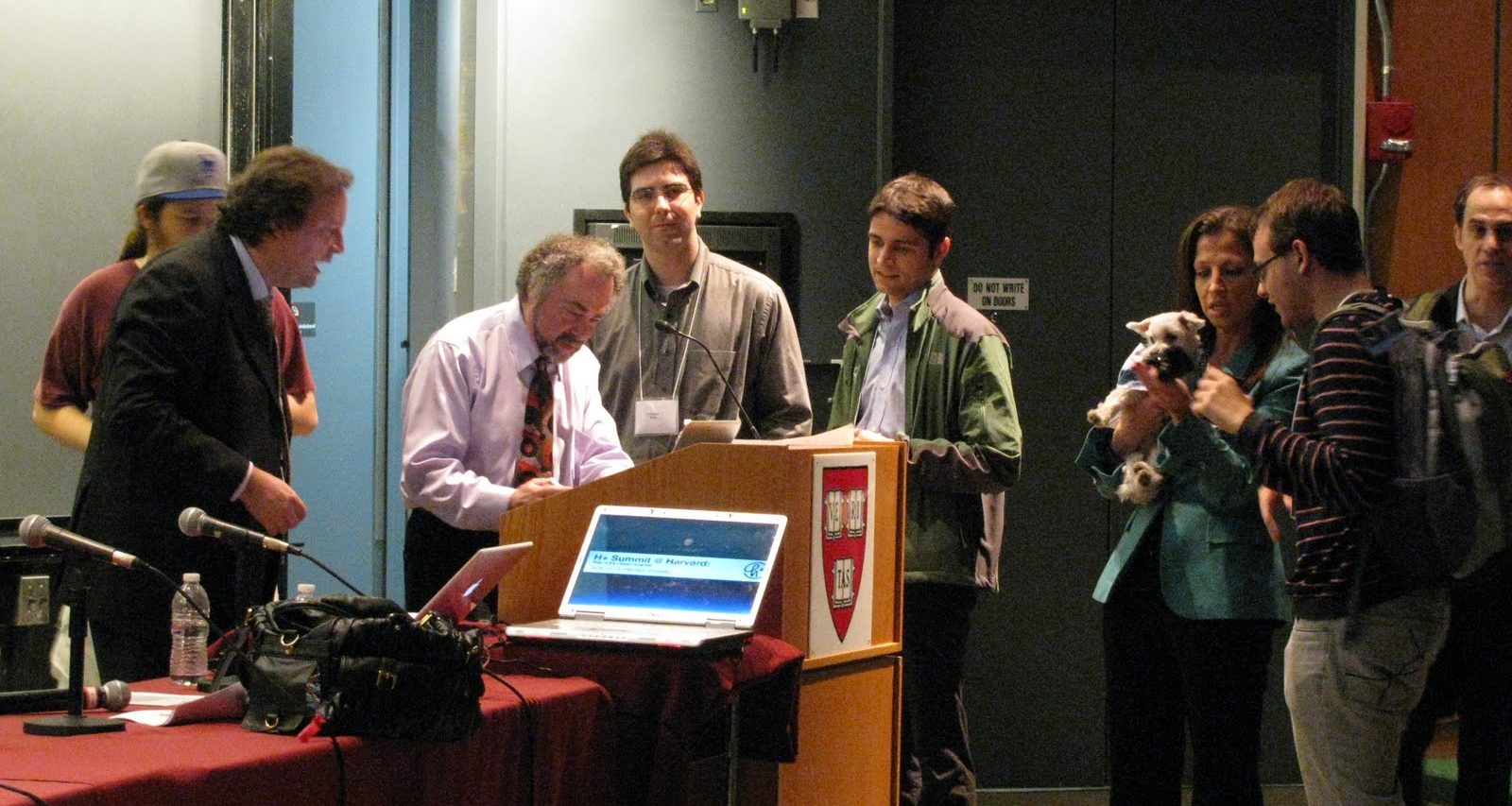