If, as some transhumanists would have it, it is true that anyone with glasses, a hearing aid or a pacemaker should regard himself as a cyborg, then it is worth heeding this fable from Aesop, as translated in the Penguin edition by Olivia and Robert Temple: 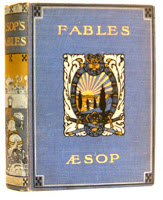 When Zeus made man, he only gave him a short life-span. But man, making use of his intelligence, made a house and lived in it when winter came on. Then, one day, it became fiercely cold, it poured with rain and the horse could no longer endure it. So he galloped up to the man’s house and asked if he could take shelter with him. But the man said that he could only shelter there on one condition, and that was that the horse would give him a portion of the years of his life. The horse gave him some willingly.

A short time later, the ox also appeared. He too could not bear the bad weather any more. The man said the same thing to him, that he wouldn’t give him shelter unless the ox gave him a certain number of his own years. The ox gave him some and was allowed to go in.
Finally the dog, dying of cold, also appeared, and upon surrendering part of the time he had left to live, was given shelter.
Thus it resulted that for that portion of time originally allotted them by Zeus, men are pure and good; when they reach the years gained from the horse, they are glorious and proud; when they reach the years of the ox, they are willing to accept discipline; but when they reach the dog years, they become grumbling and irritable.
One could apply this fable to surly old men.

If it were not for the odd moral, here is a story that would surely do both Nick Bostrom and Natasha Vita-More proud, with its acknowledgement of the longstanding impulse to overcome the limitations of human givenness and the further spice of transgressive species-mixing.
But let us look at the fable again. In one sense it has a pretty literal truth: human beings have indeed lengthened our lifespans by the use of our intelligence, and surely the domestication of animals, by which they give us a portion of their years, is part of that long-term process. Aesop plainly understands the potential for the power we have over nature.
But Aesop adds to C.S. Lewis’s insight in The Abolition of Man that to speak of man’s conquest of nature is misleading; what really happens is the increase in the power some men hold over others. In the fable we see further that when we change, we echo the characteristics of what changes us. So if the transition to the transhuman requires — as it will — the combined forces of the medical-technological complex, then we should only expect that transhumans will reflect their origins. Indeed, when people express an aspiration to have minds uploaded into computers, and computer-based metaphors are routinely used to describe minds, noting the likelihood of such a transformation of human character would hardly seem to be cause for controversy. It is the very point.
But we can still pose the question about what traits we might actually expect to pick up from the medical-technological complex. Looking at Aesop’s fables generally, it has to be said that dogs do not come off very well — although they are occasionally portrayed as loyal and intelligent. So why do humans get their grumbling and irritable years instead? Who knows?
In the same way, we know the sorts of creative, free-spirited characteristics transhumanists aspire to — but is that all they will get? In computer-like minds and mind-like computers, will there be no admixture of the bureaucracy, the humorlessness, the impersonality and routinization that commonly characterize the kinds of large businesses on whom the burdens of actual human reconstruction will likely fall?
Case in point: when IBM discovered that the profit of “teaching” Watson colloquial language was that it started to curse, our modern Prospero quickly deleted the lesson from its Caliban.

3 thoughts on “Fables of Posthumanity”