The Grand Academy of Silicon Valley 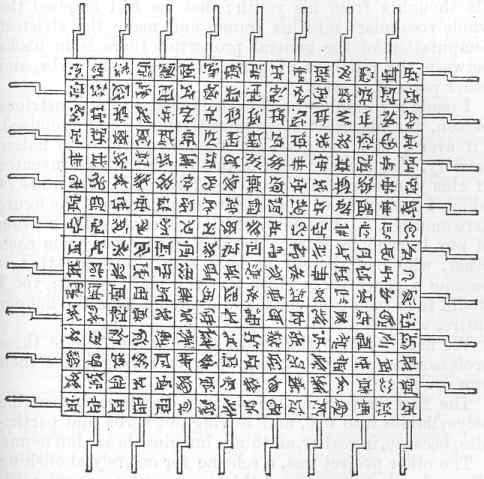 After writing today’s post I couldn’t shake the notion that all this conversation about simplifying and rationalizing language reminded me of something, and then it hit me: Gulliver’s visit to the grand academy of Lagado.

A number of the academicians Gulliver meets there are deeply concerned with the irrationality of language, and pursue schemes to adjust it so that it fits their understanding of what science requires. One scholar has built a frame (pictured above) comprised of a series of turnable blocks. He makes some of his students turn the handles and other students to write down the sentences produced (when sentences are produced, that is).

But more interesting in light of what Mark Zuckerberg wants are those who attempt to deal with what, in Swift’s time, was called the res et verba controversy. (You can read about it in Hans Aarsleff’s 1982 book From Locke to Saussure: Essays on the Study of Language and Intellectual History.) The controversy concerned the question of whether language could be rationalized in such a way that there is a direct one-to-one match between things (res) and words (verba). This problem some of the academicians of Lagado determined to solve — along with certain other problems, especially including death — in a very practical way:

The other project was, a scheme for entirely abolishing all words whatsoever; and this was urged as a great advantage in point of health, as well as brevity. For it is plain, that every word we speak is, in some degree, a diminution of our lunge by corrosion, and, consequently, contributes to the shortening of our lives. An expedient was therefore offered, “that since words are only names for things, it would be more convenient for all men to carry about them such things as were necessary to express a particular business they are to discourse on.” And this invention would certainly have taken place, to the great ease as well as health of the subject, if the women, in conjunction with the vulgar and illiterate, had not threatened to raise a rebellion unless they might be allowed the liberty to speak with their tongues, after the manner of their forefathers; such constant irreconcilable enemies to science are the common people. However, many of the most learned and wise adhere to the new scheme of expressing themselves by things; which has only this inconvenience attending it, that if a man’s business be very great, and of various kinds, he must be obliged, in proportion, to carry a greater bundle of things upon his back, unless he can afford one or two strong servants to attend him. I have often beheld two of those sages almost sinking under the weight of their packs, like pedlars among us, who, when they met in the street, would lay down their loads, open their sacks, and hold conversation for an hour together; then put up their implements, help each other to resume their burdens, and take their leave.

But for short conversations, a man may carry implements in his pockets, and under his arms, enough to supply him; and in his house, he cannot be at a loss. Therefore the room where company meet who practise this art, is full of all things, ready at hand, requisite to furnish matter for this kind of artificial converse.