the American university and resource dependence 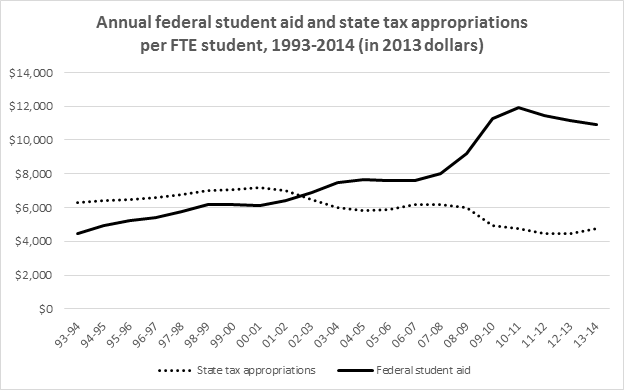 We’ve heard a lot in recent years about the decline in American states’ support for higher education — which has indeed been happening — with the implicit or explicit corollary worry that this decline is leading to the privatization of the university, the subjugation of academe to the demands of the marketplace, etc. And I don’t think those worries are wholly misbegotten. But this post by Beth Popp Berman suggests that there may be something larger to think about: the transfer of universities’ resource dependency from state governments to the federal government, thanks to a pretty massive rise in federal student aid — which comes with strings attached, for students and institutions alike. Here’s Berman’s conclusion:

If organization theory tells us anything, it’s that resource dependence matters. When, five years down the road, we get a Race to the Top rewarding colleges that meet completion and job placement goals at a given tuition cost, I know where I’ll be looking: at that point in 2002 where higher ed waved goodbye to the states and hello to the feds.

Given the close collaboration of our national government with the world’s biggest businesses, it seems unlikely that this development will bring about a rescue from privatization. Rather, the feds are likely to be a very effective instrument for implementing the values and priorities of the market.

Among other things, this means that finding ways to create educational environments that are genuinely intellectually independent, and genuinely countercultural, is just going to get harder. James Poulos has suggested that small, private, online courses may be the future of educational seriousness and genuine innovation. That’s an argument worth considering, and I hope eventually to do so here.