The cover of Wired magazine’s June 2008 issue says it all: 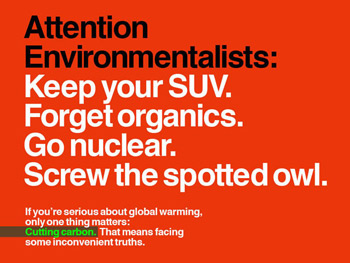 The article inside even more directly takes on the environmental movement, starting with its title: “Inconvenient Truths: Get Ready to Rethink What It Means to Be Green.” The article outlines a list of ten “inconvenient truths” (a play on the title of Al Gore’s documentary and book, which has also been recently parodied by Iain Murray). The article argues that “winning the war on global warming” — the paramount goal of today’s environmental movement — “requires slaughtering some of environmentalism’s sacred cows.” That means greens cannot “afford to ignore…the carbon-free electricity supplied by nuclear energy.”

Although this is Wired’s most blunt statement in favor of the use of civilian nuclear energy, it’s worth noting that a few years ago the magazine also dedicated considerable space to a friendly profile of Patrick Moore, the Greenpeace co-founder who now advocates for nuclear power.

The ten “inconvenient truths” are here: