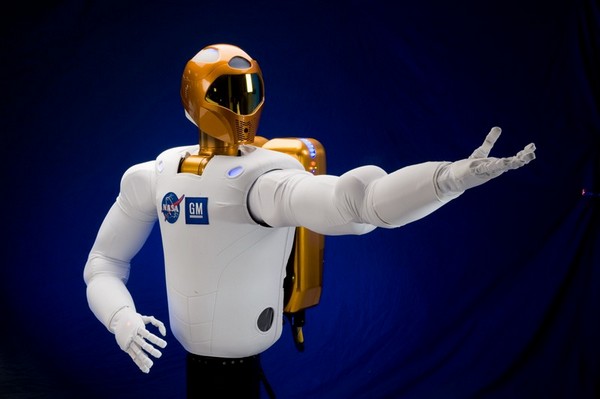 According to NASA, a humanoid robot will be sent into space for the first time later this year. Perhaps fittingly enough, it will be on STS-133, the last manned space mission to be launched directly by NASA for the planned future. Wired magazine writes:

James Hughes, who studies emerging technologies at Trinity University [College], suggested that humanoid robots may provide a nice middle ground between hardcore human spaceflight evangelists and those who would rather see robotic missions. Most space watchers feel that the human programs are what drives interest and funding in exploration, while scientific investigation will be driven by robots.
“A humanoid robot splits the difference. You get some of the advantages of both and hopefully it will be a nice compromise between the two,” said Hughes. “But it may not satisfy either side.”

The article also points out that humanoid robots might fulfill some useful functional gaps. That part is reasonable if true. But to say that humanoid robots split the difference between the cases for manned and robotic space travel is rather like looking at the debate over whether to travel to Mars and saying we can split the difference by going halfway there and back. (Don’t insult my intelligence, Kirk.)
To get a full sense of the folly of socialized robotics — that is, robots that are designed to elicit responses from humans as if they were human, without actually being human — read Caitrin Nicol’s “Till Malfunction Do Us Part.” And don’t miss Robert Zubrin’s case for manned space travel in the new issue of The New Atlantis.
(hat tip: Brian Boyd)