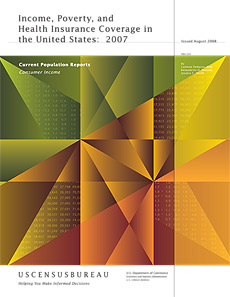 As has been widely reported (see here and here), the most noteworthy change was a surprising drop in the number of uninsured Americans, from 47 million in 2006 to 45.7 million in 2007.

Of course, many analysts have correctly noted that these numbers were collected just prior to the housing sector meltdown last fall. Since then, the economy has cooled, and unemployment has risen. It is likely that 2008 will show a large uptick in the uninsured rate.

Even so, the drop in 2007 is worth pondering. What seems to be at work is the accumulation of a large number of states using the resources available to them to expand coverage for children through public insurance and to pursue broader reform strategies for the general population, such as in Massachusetts.

Less noticed but always startling are some of the subtotals beneath the headline uninsured number. For instance, according to the census data, about 23% of the population are between the ages of 18 and 34, but 40% of the uninsured are in that age range.

Why? The answer is straightforward. These are people just entering the workforce, so their wages are low, but their premiums are high in the sense that their expected health costs are often far below the cost of community-rated premiums for expansive insurance coverage. Consequently, they often take the risk of going without insurance in order to save on premium costs.

Addressing this problem is very different from trying to secure coverage for a person afflicted with an expensive chronic illness, but our public policy debates rarely make the distinction.