Here is a key but subtle question in the health care debate: Is Medicare a passive victim of rapid health care cost inflation, or a primary cause of it?

To some, Medicare is just one car among many attached to the runaway cost train. From this perspective, slowing Medicare spending will require slowing down the engine which is pulling all of the cars too quickly down the tracks. And what is this engine? Most often, those sympathetic to this point of view suggest the problem is lack of discernment in the adoption of expensive new medical technologies. The implication is that what is needed most is not Medicare reform but health care reform which puts up more governmental barriers to innovative products and new technology on behalf of all payers, public and private.

But there is an alternative view. Medicare’s design — fee-for-service insurance, with virtually no cost-sharing at the point of service for most beneficiaries — is the most important source of financing for today’s fragmented and uncoordinated delivery system. In most markets, Medicare is the dominant insurer, and other private payers follow the program’s lead. As currently run, Medicare beneficiaries have strong incentives to use emerging technology more intensively with each passing year. Moreover, Medicare’s payment rules are set so that providers — hospitals, physician practices, labs, and others — can remain financially viable without effective integration or coordination. The resulting fragmentation in health care delivery makes it nearly impossible to reward efforts at improved efficiency and cost-effective care.

Looked at from this perspective, what is needed most desperately is a Medicare reform which changes the financial incentives so that insurers and providers themselves are rewarded for weeding out low value or ineffective use of services, including unnecessary use of high-tech medicine.

Normally, the Congressional Budget Office (CBO) is not supposed to take sides in these kinds of debates. But in recent months, there has been an unmistakable shift in emphasis in the agency’s health care work. This was particularly evident in a recent publication on the role of new technology in rising health care costs (available in PDF format here), in which CBO said the following:

Straightforward changes to the Medicare and Medicaid programs, such as more stringent eligibility criteria, greater cost-sharing, or changes in provider payments, could reduce federal spending in part by shifting costs from the federal government to households. Ultimately, however, such cost-shifting approaches are unlikely to be sustainable, and controlling federal spending on health care while maintaining broad access to care under these programs will therefore almost certainly need to be associated with slower cost growth in the health care sector as a whole. 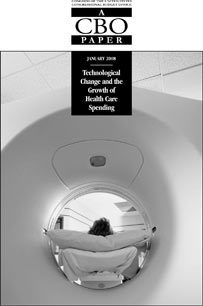 The implication is clear: CBO is siding with those who say Medicare reform won’t solve the problem; what is really needed is a broader effort to impose more governmental control over the use of health care services, system-wide.

CBO based this conclusion on its finding that technological change accounted for about half of the real spending increase in health care over the last four decades, for public and private payers. This was anything but a straightforward calculation. CBO assigned cost inflation to other factors first, and then assumed that any unexplained residual was due to technological advances. But, although mentioned in passing, CBO underplayed the potential dynamic role of the various factors. For instance, CBO suggested that only about 10 percent of the real cost increase was due to the spread of expansive third-party payments, such as Medicare. But disentangling the effect of insurance coverage from new technology is not so easy. Indeed, other researchers have argued persuasively that it was the spread of third-party insurance that essentially paved the way for rapid technological advancement.

Medicare reform, properly understood and constructed, should be thought of as the indispensable first step of an effective approach to health care reform, necessary to get the financial incentives right for providers to pursue on their own new arrangements oriented toward high quality and cost-effective care. Introducing more governmental control over health care delivery is just as likely to lead to bad bureaucratic decision-making as to more efficient care.

CBO’s professional staff is highly productive and professional. But the agency’s mission is to provide objective analysis, not policy advice. And for good reason.