Obamacare is a Budgetary Disaster

Congressman Paul Ryan’s systematic dismantling of the argument that Obamacare would cut the budget deficit, delivered at the Blair House “summit” meeting, has gotten a lot of attention in recent days, and deservedly so. The Wall Street Journal ran the full text of his presentation on its opinion page yesterday and amplified his arguments in an editorial of its own. At Blair House, neither the president nor any other Democrat present offered a direct rebuttal to Ryan’s critique. The president chose to change the subject instead.

This week, however, top administration officials have come forward with a belated defense — of sorts. 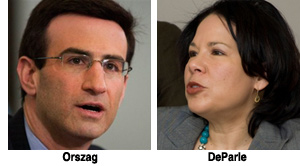 First, OMB Director Peter Orszag penned a blog post taking issue with one of Ryan’s points, namely that the plan relies on ten years of offsets to pay for only six years of spending. And today, Orszag and White House Health Reform Czar Nancy-Ann DeParle have an op-ed in the Washington Post that expands upon Orszag’s post.

Orszag and DeParle start by agreeing with Ryan that delaying the start date of an entitlement expansion is a tried-and-true budget gimmick, designed to push the full cost of the additional spending outside of the “budget window” covered by a cost estimate.

But, not to worry, they say. In this instance, it’s not a gimmick because the deficit reduction from their plan just keeps growing over time. They claim the president’s health plan would produce deficit reduction of $100 billion over ten years and $1 trillion in the second decade.

Of course, there’s another reason besides balancing revenue and spending to push the start of an entitlement back, and that’s to make the ten-year cost look much smaller than it really is. Recall that the president promised in his address to Congress last September to deliver a bill that costs only “$900 billion” over a decade. The new entitlements the Democrats want to create would cost much, much more than $90 billion per year. In fact, the Congressional Budget Office (CBO) says they will cost about $200 billion per year by 2019. And so, to get the media to now say his plan costs only “$1 trillion” (what’s $100 billion among friends!), the administration delays the coverage expansion provisions until 2014. Never mind that the president also says the uninsured can’t wait a day longer for the legislation. Once enacted, he would make them wait — for four years.

As Ryan noted, however, once the program did get up and running, costs would soar. The Senate Budget Committee Republican staff estimates the Senate bill’s cost at $2.3 trillion over ten years when fully implemented.

In their Post op-ed, Orszag and DeParle do not even attempt to address the many other points Ryan made which expose the dubious assumptions and sleight of hand behind their deficit-cutting claims.

For instance, the health reform bill is filled to the brim with Medicare changes, but the one Medicare provision the president and the Democrats want to pass separately from the health bill is the so-called “doc fix,” which would repeal a cut in Medicare physician fees at a cost of $371 billion over ten years. Of course, splitting their agenda into two or three bills doesn’t change the total cost. When the “doc fix” is properly included in a tally of what the president is pushing, all of the supposed deficit reduction vanishes.

Then there’s the double-counting that Ryan exposed. The president’s plan starts up yet another entitlement program, providing long-term care insurance. Enrollees have to pay premiums for a number of years before they qualify for any benefits. Consequently, at startup, there’s a surplus of premium collections — $73 billion over ten years, according to CBO — because no one qualifies for the benefits yet. The president and his team count these savings against the cost of health reform — even though the money will be needed later to pay out long-term care insurance claims. When this gimmick is taken out of the accounting, the president’s health proposal goes even deeper into the red.

Over the long-run, the administration’s claim of large-scale deficit reduction hinges on the dubious assumption that future elected officials will demonstrate more political courage than those in office today.

For most of last year, the president said that he would “bend the cost-curve” in large part by imposing a new tax on “high-cost” insurance plans. The tax would hit more and more middle class beneficiaries each year because the threshold for determining what constitutes a “high cost” plan would grow much more slowly than medical costs. In fact, after a number of years, virtually all Americans would be in plans at or above the “high-cost” threshold.

House Democrats and their union allies despise this tax. Last week, the president caved in to their pressure and pushed the start date of the tax back to 2018, well past the point when he will have left office. Even so, Orszag and DeParle still claim credit for the massive revenue hike that would occur in a second decade of implementation. They want us to believe we can finance a permanent, expensive, and rapidly growing new entitlement program with a tax the president himself was never willing to collect.

In Medicare, Orszag and DeParle like to highlight so-called “delivery system reforms” the administration has touted. In the main, these are extremely small-scale initiatives and pilot programs. CBO says they will amount to virtually no savings. The big Medicare cuts in the president’s plan come from across-the-board payment-rate reductions. In particular, the president wants to cut the inflation update for hospitals, nursing homes, and others by half a percentage point every year, in perpetuity. On paper, this change produces huge long-run savings. But it does nothing to control the underlying cost of treating patients. It just pays everyone less, without regard to patient need or quality of care. The chief actuary of the program has said repeatedly that these cuts are completely unrealistic for these very reasons. If implemented, he expects they would drive one in five facilities into serious financial distress. And yet Orszag and DeParle want us to believe these savings can be counted to finance the president’s massive entitlement promises.

And massive they are. CBO says the coverage expansion provisions in the Senate-passed bill would cost about $200 billion by 2019, and that cost would rise 8 percent every year thereafter.

But even these estimates understate the true cost of Obamacare. The president’s plan, like the House and Senate bills, would extend generous new insurance subsidies to low- and moderate-wage workers getting insurance through the new “exchanges.” Workers in job-based plans would get no additional help. That means two workers with identical incomes would be treated very differently. Gene Steuerle of the Urban Institute has estimated that, in 2016, a worker with job-based coverage and a $60,000 income would get $4,500 less than someone with the same income but health insurance through the exchange. This kind of inequitable treatment would never last: one way or another, the entitlement would get extended to everyone in the targeted income range, sending the overall costs of the program soaring.

The president started off last year by saying he wanted to “bend the cost-curve” even as he broadened coverage. But after a year of partisan political and legislative maneuvering, all that’s left is a massive entitlement expansion. The new costs would get piled on top of the unreformed and unaffordable entitlements already on the books. It’s a budgetary disaster in the making.