That may begin to change this year, however. On the central public policy question in health care — what can be done to slow cost escalation? — Republicans are far more confident than Democrats that they have an answer that will work and that the public will support. 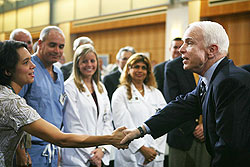 That was apparent in Senator John McCain’s important health care speech yesterday. The presumptive Republican nominee for president discussed his vision for American health care, and, once again, he came down strongly on the side of a market-based solution. His presentation was forceful and persuasive.

McCain’s core argument is that conversion of today’s tax preference for employer-paid premiums into a tax credit flowing to households and individuals would spark much more intensive price- and quality-competition in health care. That kind of competition would, in turn, force insurers and those delivering care to improve productivity and the quality of care they provide.

McCain is far from alone in holding this view; conservative economists have been saying effective health care reform requires a tax fix since the 1970s. But this is the first time a Republican presidential candidate has made a market-based reform one of the central themes in his campaign for the presidency.

The Democratic candidates, Senators Hillary Clinton and Barack Obama, still enjoy the advantages on health care. Voters are of course attracted to their promises of lavish new insurance subsidies.

But on cost control, the Democrats are on shaky ground. Their health care plans will only work if they embrace the kinds of government-imposed budgets employed by Canada and Europe — price-setting by the government, and other measures which limit the supply of services. But their health care talking points make no mention of these steps because the candidates know they would be attacked, accurately, for supporting government-enforced rationing of care, which would not be popular with voters.

Senator McCain’s confidence on health care is clearly increasing, as it should be. He has the better argument on what should be done to slow health care inflation, and he can at least neutralize the health care issue if he makes the case repeatedly in the coming months.