At the time of its enactment in 2003, the Medicare drug benefit — known as Medicare Part D — had many critics. Some said the program, which is built on consumer choice and vigorous competition among private plans, wouldn’t work, because the private plans would decline to participate without a guaranteed share of the market. Others said the beneficiaries wouldn’t sign up for the voluntary benefit, because the competitive structure would be too complex to navigate. Still others said the program would explode in costs without government-imposed price controls.

All these predictions were dead wrong. The program is now in its sixth year of operation, and it has exceeded all expectations. Some 90 percent of Medicare participants are now in secure drug coverage of some sort, and public-opinion surveys continue to show that seniors are very satisfied with the new program. Most important, the drug benefit’s costs for the first decade are coming in 42 percent below what was predicted at the time of enactment.

As this evidence of success has piled up, the critics largely and wisely went silent, realizing they had little ground to stand on.

But that began to change when Rep. Paul Ryan proposed a broader reform of Medicare that is modeled on the Part D success story. Now the critics have little choice but to try to discredit Part D lest they lose the battle over the future of Medicare. And so the attacks have resumed.

The only problem is that the critics’ arguments still have no basis in fact.

Take the latest attack from Washington Post blogger Ezra Klein. He recently argued: (a) that spending on prescription drugs throughout the health-care system (that is, not just in Medicare) is also far below previous expectations, which proves that Part D’s market-based design had nothing to do with costs’ coming in under budget; (b) that, regardless of what has happened to date, future Part D spending is expected to rise rapidly, thus undermining claims of cost discipline; and (c) that Part D premiums are 57 percent higher in 2011 than in 2006.

Unfortunately for Klein, each of these criticisms is easily dismissed.

Moreover, there’s a real question about what precipitated the fall in projected spending systemwide in the first place. Obamacare apologists are constantly arguing that changes in Medicare have the potential to influence the entire health-care market. Well, if that’s the case, it would apply to Part D as well. For instance, Part D plans have aggressively pushed generic substitution as a way to lower premiums — and they have had considerable success. Isn’t it likely that this trend among the elderly has influenced how physicians and pharmacists behave with all their patients?

In sum, the drop in drug spending systemwide is not evidence of Part D’s irrelevance. Indeed, it reinforces the point that Part D has been effective.

Next, Klein cites estimates from the CMS actuaries to argue that, even if Part D cost escalation has been moderate in the past, it is set to rise sharply in the future. But he fails to mention that a main reason for projected cost growth going forward is that Obamacare expanded the drug benefit by closing the so-called “doughnut hole.” Moreover, the actuaries have noted that these projections come with great uncertainty. What we do know with certainty is that costs in the program’s first five years have come in remarkably low.

Finally, Klein argues that Medicare beneficiaries are paying premiums in 2011 that are 57 percent higher than they were in 2006. This is demonstrably false. The data Klein cites are based on a subset of the program — the stand-alone drug plans — which means Medicare Advantage enrollees and those with employer-sponsored drug coverage are excluded from the calculation. Moreover, it assumes that seniors in 2011 will remain in the same plans they were in in 2010. But the whole point of Part D’s consumer-choice structure is that it allows enrollees to migrate out of plans with high costs to those with lower costs. And, not surprisingly, that has happened every year of the program’s operation. The actual premiums paid by enrollees in 2011 are expected to be well below those cited by Klein.

The truth that Klein and others seem unwilling to face is that, on an “all in” basis, Part D has been a phenomenal success story, as shown in the graph below. From 2006 to 2010, per capita Part D costs across all settings have risen by an average of just 1.2 percent annually, which is well below the per capita rise in costs for the rest of Medicare. 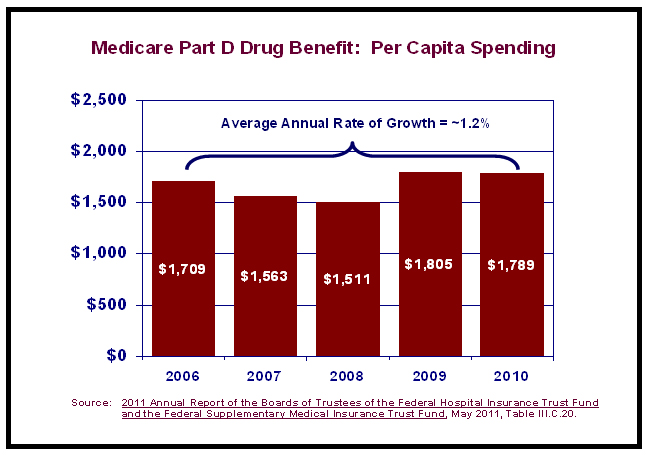 The key to the drug benefit’s early success is engaged consumers. Seniors want to get the best value for their Part D premium, and that means looking for low-premium plans with good coverage for the drugs they need. The result has been a record of cost control that has never been matched by government micromanagement — and never will be.