CMS-Driven Delivery Reform?: No — Build a Marketplace Instead

The Medicare Payment Advisory Commission (Medpac) issued its annual June report (available here in PDF) to Congress last week. This year’s report has as its main theme reform of the delivery system — which is to say, reform of those arrangements which govern how and where patients get care. What can be done to make this “system” more efficient, patient-focused, and of higher quality?

This is how Medpac’s commissioners describe the reason reform is necessary: 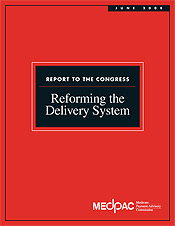 In previous reports, the Commission has recommended that Medicare adopt tools for increasing efficiency and improving quality within the current Medicare payment systems…. However, in the current Medicare FFS [fee-for-service] payment system environment, the benefit of these tools is limited for two reasons. First, they may not be able to overcome the strong incentives inherent in any FFS system to increase volume. Second, paying for each individual service and staying within the current payment systems (e.g., the physician fee schedule or the inpatient PPS [prospective payment system]) inhibit changes in the delivery system that might result in better coordination across services and lead to efficiencies or better quality across the system.

This commentary from Medpac marks an important shift in the tenor of health policy discussions. In effect, Medpac is arguing that we need a fundamental shift in how Medicare pays for services in order to provide the incentives needed for a restructuring of existing provider arrangements for everyone. Beneath Medpac’s recommendations is the admission that Medicare’s current design is the most important reason health care provision today is so fragmented, uncoordinated, often of poor quality, and highly inefficient.

But this is a prescription for delay and failure. Congress and CMS (the Centers for Medicare and Medicaid Services) are utterly incapable of rapidly designing and implementing any type of payment reform which entails losers — which any sensible reform will. The political pressures are simply too intense.

One need only watch what’s happening in Congress this month to see why. For the better part of a decade, CMS has been working to test and implement a competitive bidding approach to selecting durable medical equipment suppliers for beneficiaries. But, just as the reform is about to be implemented, opponents of the reform have convinced many in Congress that it is unfair and will harm beneficiaries. Nothing is certain, but it seems more likely than not that the CMS effort will be postponed into next year by Congress.

Medpac is right that Medicare needs to move in an entirely new direction. But a much more promising approach to delivery system reform would be to build a marketplace in which providers would have strong incentives to reorganize on their own based on competitive pressures, not government regulation.

For instance, if Medicare moved more in the direction of a defined contribution program, beneficiaries could be given two choices each year: one for their preferred insurance arrangement, and one for their preferred provider arrangement. The provider arrangements would be integrated delivery networks, with hospitals, physicians, labs, surgical centers, labs, and hospices combined into some form of organizational unit. Some might look more like staff model HMOs, other more like loosely affiliated PPOs. Either way, they would be required to provide beneficiaries with some level of coordination so that patient records would be electronic and accessible and billing would be streamlined. These provider arrangements would not act as insurers, but they would have in place contracts with each of the private Medicare insurers in the marketplace. Beneficiaries would therefore have the ability to find the combination of insurance and provider network most to their liking.

No reform is without complications, this one included. But it would fundamentally shift power from the CMS bureaucracy and political system of allocating resources to the patient. Most importantly, with patients given the power to make their preferences known, providers would have strong incentives to organize themselves for convenience, quality, and efficiency.