Questions for Damian Adams, Donor-Conceived Adult: Part One: Blogging the search for your father 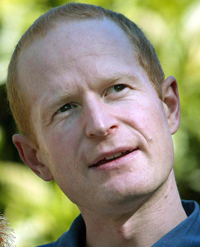 Damian Adams was conceived through donor insemination in 1973 at the Queen Elizabeth Hospital in Adelaide, South Australia. He has been searching for his biological father for over five years, and keeps a blog, Donated Generation, on donor conception ethics and practices.

An advocate for the rights of DC offspring, he has worked with the Donor Conception Support Group of Australia and TangledWebs. He has made numerous media appearances to discuss the unique challenges faced by other “half-adopted” people. You can learn more about his search here.

In this interview, we discuss his search for his biological father, children’s rights, and the donor anonymity debate.

For more on donor-conceived offspring, see my latest article in The New Atlantis.

When did you start your blog? Do your friends and family know about the blog? How have people reacted?

DA: I started the blog in July 2006. My wife knows about it as do some of my DC community friends on the Web. No one else does. To be honest, I haven’t had much reaction about it apart from my DC friends who appreciate and agree with what I have written.

When and how did you find out that you are donor-conceived?

DA: From the very beginning. I would have been about three or so.

I imagine if I had found out later in life that I would have taken it very badly and harbored bad feelings towards my parents for deceiving me. Many people use the argument of early disclosure to say that if it occurs then the person would be happy with being DC. I guess I am evidence to the contrary.

You say on your blog that it wasn’t until you were 28 and had children of your own that you began to question your origins. What changed for you?

DA: While I started off searching for non-identifying information (as I at one time agreed with anonymity), I have now changed my perspective, and I wish to know who this person is. This view changed after the birth of my daughter. It was a moment not too dissimilar to the moment that parents often report experiencing when they hold their child for the first time and stare into their baby’s eyes. It was an acceptance and knowledge of a biological connection. That no matter what might happen in the world, we would always be father and daughter. No one or no thing would ever be able to change this.

This biological connection made me think about how I would feel if my daughter grew up not knowing who I was. I need to complete the picture of who I am not only for myself but also for my children. My search is just as much for them as it is for me. The implications of being donor-conceived do not end with me but continue on into the following generations.

How long have you been searching for your donor?

What have you done in searching for your father/siblings? Are you on any donor/sibling registries?

DA: I have been in contact with the hospital and the clinic that obtained the records when the hospital stopped conducting fertility treatment. I have also spoken to the clinicians involved at the time. Through some strange coincidence, my wife’s obstetrician, who delivered our children, was one of the registrars who conducted the procedure (although I was not aware of this when he first became her obs). These clinicians have tried to help in locating records. I have searched through university records of medical students. I have appeared in print, televised, and spoken (radio) media.

I have also joined/registered on a couple of online registries. While there has been a South Aussie donor who has since listed on one of those registries, he is not from my era. There are no other South Australian offspring on them as yet. I decided to finally put my name on them to cross all the boxes and leave no stoned unturned.

I believe that I know who my father is. However, he has denied it. This has been extremely traumatic, and I cannot obtain closure. I cannot get a definitive answer either way.

Have you met any potential half-siblings? If you haven’t, would you want to meet any?

DA: I have not met any potential half siblings. But I would like to. To me the issue of half-siblings, whether through other donations or from a normalized relationship with my father, is of equal importance as finding my father.