State of the Art

Lessons from a Decade of Missed Opportunities

I truly believe the NIH is one of America’s greatest assets,” President George W. Bush said on a visit to the National Institutes of Health’s sprawling Bethesda, Maryland campus in January 2007, “and it needs to be nourished.”

He was certainly right about the value of the 120-year-old agency, which supports basic biological and medical research through tens of thousands of grants to scientists and institutions each year. NIH has had a lot to do with America’s leading role in medical research and biotechnology, and has helped advance treatments and cures that have improved the lives of millions. And NIH has not lacked for nourishment, either: its $28.5 billion budget this year is more than twice what it was a decade ago.

But blunt dollar figures alone do not tell the full story. In fact, both the way Congress has expanded the NIH budget and the way NIH has made use of its new funds offer important cautionary lessons for the future of the agency.

The NIH budget was doubled between 1998 and 2003, an effort spanning four Congresses and two presidents, and spearheaded from start to finish by two Senators: Republican Arlen Specter of Pennsylvania and Democrat Tom Harkin of Iowa. As the Senate has switched hands through the past decade, Specter and Harkin have alternated as chairman and ranking minority member of the Senate subcommittee in charge of the NIH budget. They saw the rapid doubling of the budget as a means of expressing the country’s commitment to medical research, and spurring broader and deeper biomedical innovation.

But in retrospect, the doubling of the budget looks to have been far too rapid, and not adequately tied to structural reforms that might enable NIH to best make use of its growing resources. The steep growth in spending, roughly 15 percent per year for five years, built expectations and momentum that set the agency up for disappointment when the doubling was done. Research institutions used the added funds to initiate new projects, support many more graduate students, and establish more programs and labs. But these all require continuing support beyond the five-year doubling period, which meant that once the steep increases were done and the NIH budget returned to normal growth rates of about 3 percent per year, an enormous portion of the budget went towards continuing support for projects established in the fat years, and not enough was left to fund new ventures. 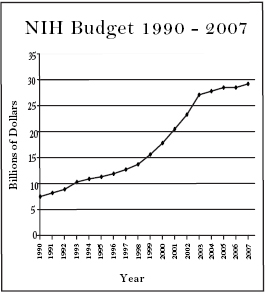 The glut of graduate students enticed by the growing support a few years ago have since found it difficult to get their own work funded once they finished their training, and the sudden deceleration in funding has left many researchers feeling slighted even though their funding grew by leaps and bounds in the past decade. Slower growth over a longer period would have offered a far more stable and sustainable means of expanding the American biomedical research enterprise.

But even during those five fat years, NIH did not use its rapidly expanding resources to broaden the field of funded institutions and programs. While the size of the average NIH grant grew significantly during that period (the average size of an individual investigator grant grew by nearly 25 percent) the pool of institutions receiving funding hardly changed at all. As the Chronicle of Higher Education found in reviewing lists of NIH grantees in the wake of the doubled budget, of the 515 institutions receiving direct grants to investigators in 2003, only five had not been receiving such grants prior to 1998. Moreover, the portion of grants going to the top 100 research institutions in 2003 was 92 percent, exactly the same as it was in 1998. In other words, more NIH funding meant more money for the same relatively small cadre of elite institutions — Johns Hopkins, the University of Pennsylvania, the University of California system, and other familiar giants — and even there it contributed to a surplus of new projects and researchers that quickly became burdensome once the growth spurt ended.

By the end of the process, in 2003, NIH had a larger budget than most cabinet departments. Policymakers and elected officials have been left scratching their heads at the delegations of scientists complaining of tight budgets in the past three years, even as they got twice the annual funds they received just five years earlier. A group of researchers testifying before Harkin and Specter’s subcommittee in March 2007 sounded a strikingly depressing note. The slower growth of the NIH budget, complained Harvard cell biologist Joan Brugge, “not only forestalls progress but creates an atmosphere of uncertainty and anxiety.” And the researchers know the growth spurt of the last decade is partly to blame. “We bought in” to the doubling, Brugge told Science magazine on the day of her testimony, “and now we’re getting cut.”

The blame for expanding the NIH budget too quickly rests largely with Congress, and especially Senators Specter and Harkin, who preferred the symbolic “doubling in five years” to a more sensible course of slow and steady sustainable growth. But the failure to adequately spread the wealth falls also at the feet of NIH itself. It is particularly the fault of the agency’s exceedingly inefficient and bulky institutional structure, which both wastes resources on needless duplication of administrative overhead and is so specialized that it creates overly rigid and nearly permanent channels of funding.

This proliferation of institutions not only duplicates administrative costs, it also creates excessively specialized avenues of funding, and with them relationships between the NIH institutes and their supported research labs, that inherently constrain the scope of potential NIH grantees.

These structural problems have a lot to do with the politics of medical research funding. Powerful patient groups, or those with the backing of a particularly influential member of Congress, can exercise great sway over the workings of NIH through legislation, even creating a special institute to focus on their particular concerns. Any proposal to consolidate, moreover, is inevitably described as a cut in funding for research on the relevant ailment or condition, and so is simply a non-starter.

But NIH itself has also done much to fight off any reform. Elias Zerhouni, who has served as director of the agency since 2002, has vigorously resisted any consolidation of institutes, and has instead promoted increased flexibility through a common fund, run out of the director’s office, to which the different institutes contribute and which can then be applied to particularly pressing research priorities as they arise. The fund is a good idea, and Zerhouni on the whole has been a very effective and competent NIH director, performing admirably in an exceedingly difficult job. But neither the fund nor other minor reforms at the edges make up for the waste and rigidity caused by the basic institutional structure of the NIH.

A reasonable consolidation would serve the interests of medical research, by freeing up more dollars to support actual work in the labs, and would make the agency easier to manage and direct. The ideal vehicle for carrying out such a consolidation would be the legislative reauthorization of NIH — the process by which Congress lays out the agency’s structure, authorities, and boundaries and establishes goals for its operations. But unfortunately, the last Congress let this opportunity slip when it completed the most recent reauthorization at the very end of 2006 without requiring any meaningful consolidation of institutes.

NIH reauthorization is supposed to occur every five years, though (as with the authorization of many other agencies) Congress has dismally failed to keep up with that schedule. The last reauthorization, before the one undertaken in 2006, was in 1993. In other words, the entire doubling of the NIH budget, and the ensuing changes in the agency’s operations, occurred between reauthorizations. The 2006 reauthorization bill could have taken into account the lessons of the past thirteen years, and grappled with the unwieldy and inefficient structure of the agency. But the closest Congress came to doing so was a requirement that NIH not grow beyond the current 27 institutes — almost guaranteeing that it also would not shrink below that number. The latest reauthorization also encourages the consolidation of some management functions in the office of the NIH director — a welcome move. But it does nothing to bring order and efficiency to the structure of the institutes.

Consolidation could take a variety of forms. A modest effort might combine several particularly duplicative institutes — the ones for alcohol abuse, drug abuse, and mental health for instance — and eliminate those institutes devoted to support and administration, moving their functions into the director’s office. A more ambitious effort would seek to organize the work of NIH along just a few broad categories of research, like brain science (or neurology), internal medicine, and public health. Some duplication would persist in any scheme, of course, but a few institutes with broad mandates, rather than numerous overspecialized bodies, would encourage interdisciplinary work and permit new categories of research to emerge. Such reforms could make for both greater efficiency and less rigid channels of funding.

The best opportunity for reform in over a decade has unfortunately just passed us by. But as the last thirteen years have shown, major changes in the way NIH does business need not wait for the next reauthorization, but can come through piecemeal legislation and the annual budget process. NIH is in great need of consolidation and reform, and meeting that need would do far more good, both for the agency and for American medical research, than further crude expansions of the budget.

Link copied to clipboard!
Subscriber Only
Sign in or Subscribe Now for access to PDF downloads
Yuval Levin is a senior editor of The New Atlantis and a fellow at the Ethics and Public Policy Center. He can be reached at ylevin@thenewatlantis.com.
Yuval Levin, “Reforming the National Institutes of Health,” The New Atlantis, Number 16, Spring 2007, pp. 107-111.

State of the Art

For updates about our latest work