Skip to content
I had a look today at the disturbing, fascinating blog of Lepht Anonym, the young woman who recently caused a stir on transhumanist-leaning sites by performing various “enhancement” surgeries on herself at home. These surgeries typically involved implanting small devices in herself, such as magnets under her fingertips, meant to give her extra sensory abilities — often with medical complications resulting.
There’s actually something strangely refreshing about Anonym’s blog: it may be the only transhumanist writing I’ve seen that seems to be written by an actual person, one clearly possessed of a complicated inner life. Transhumanists usually seem to lose interest in expressing their inner lives when they give their thoughts over to the boundlessly incoherent muddle of transhumanist theorizing.
Here’s just one example of Anonym’s distinctive relationship to transhumanism:

i would very much like it if the uneducated masses who like to call me an idiot would disavail themselves of the following precepts:…
3. that you are just as much a “cyborg” as i am because you use an iPhone and wear glasses. [****] off if you are going to tell me that what i do is pointless, and i do not want to debate the definition of cybrog with any normal.

Anonym is here rejecting one of the most familiar and empty transhumanist tropes (employed just yesterday in a blog post by Philippe Verdoux, who says that “the cyborg is already among us”). 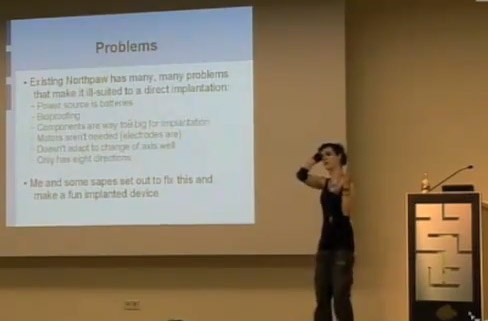 Lepht Anonym delivers a lecture.
There is much else that could be said about Anonym’s very personal chronicle. Most notable, sadly, is the confirmation, in a post dated eight days before Wired.com ran its story about her, that Anonym is a diagnosed sufferer of borderline personality disorder (BPD). One of the main symptoms of BPD is deliberate self-harm — formerly known as self-mutilation.
Transhumanists love to repeat the idea that life as we know it, inextricable as it is from aging, is inherently a state of disease (for which transhumanism is the cure). Whatever you think of the aims of that idea, it is difficult to distinguish among various diseased states as good and bad. The only easily recognizable good is resisting the disease — rebelling against the bounds of biology.
Consequently, transhumanists have no conception of any relevance to beings alive today of what it means to flourish, and neither, then, of what sorts of acts and states of mind constitute a profound lack of flourishing. And so it’s sad, if not at all surprising, to find transhumanists not only lacking the faculties to evaluate self-mutilation as the self-destructive behavior of a person in need of help, but encouraging it — both by reporting on it so enthusiastically, and by fostering a subculture in which it could be understood as a laudable act of creation and self-expression.
It’s not psychological distress: it’s “morphological freedom” through “DIY bio.” This is the terminology transhumanists use to anoint their attitude as the highest and bravest sort of enlightenment. Except, read a few of Anonym’s posts describing her self-surgeries and the complications following them, and get a sense of the motivation behind them, and those terms begin to seem like cruel euphemisms — and yet another indication that transhumanist ideology represents a step backwards, not forwards, in our betterment and self-understanding. Wired.com should seriously reexamine its decision to run this piece in the way it did. And — although I know that the moral invoked here is itself scoffed at as unenlightened — the transhumanist community should be ashamed of its role in this.
Lepht Anonym certainly has a distinctive voice and presence on her blog. I can’t help but enjoy that she has twenty-six blog posts tagged “that is illogical captain.” She can be clever, witty, and charmingly self-deprecating. Her self-description says that she “likes people,” and it shows: even in posts in which she describes her pain and confusion, there is an obvious and admirable warmth and love for her friends and family.
I hope Lepht Anonym will stick around, and will find an outlet for her energy and talents that is better for her.
UPDATE: See my follow-up post here.

Brandon Keim at Wired has a short piece and a gallery called “6 Ways We’re Already Geoengineering Earth,” related to the new conference on geoengineering being held at Asilomar:

Scientists and policymakers are meeting this week to discuss whether geoengineering to fight climate change can be safe in the future, but make no mistake about it: We’re already geoengineering Earth on a massive scale.
From diverting a third of Earth’s available fresh water to planting and grazing two-fifths of its land surface, humankind has fiddled with the knobs of the Holocene, that 10,000-year period of climate stability that birthed civilization.

The point that humans are altering geophysical processes on a planetary scale is almost inarguable. But while this alteration is an aggregate effect of human engineering, it is not in any sense geoengineering. Geoengineering is the intentional alteration of geophysical processes on a planetary scale, while anthropogenic environmental change as it exists now occurs without such intent (either through ignorance or indifference).
Mr. Keim probably had no hidden agenda himself, but the attempt to blur a distinction of intent into a difference of degree is a common transhumanist move, and a seductively fallacious one. In the case of climate change, it can lead to advocacy for what amounts to fighting fire with fire. As I’ve argued before, the lesson we ought to learn from global warming is that humans can easily alter complex systems not of their own cohesive design but cannot easily predict or control them.
Just like a project to remake man, a project to remake the planet will have to be so advanced from today’s technology as to overcome what is at least now the truth of this lesson — but it will not do so by treating the project as essentially more of the same of what humankind has already done to the planet.