Since we launched The New Atlantis, questions about human enhancement, artificial intelligence, and the future of humanity have been a core part of our work. And no one has written more intelligently and perceptively about the moral and political aspects of these questions than Charles T. Rubin, who first addressed them in the inaugural issue of TNA and who is one of our colleagues here on Futurisms.

So we are delighted to have just published Charlie’s new book about transhumanism, Eclipse of Man: Human Extinction and the Meaning of Progress. 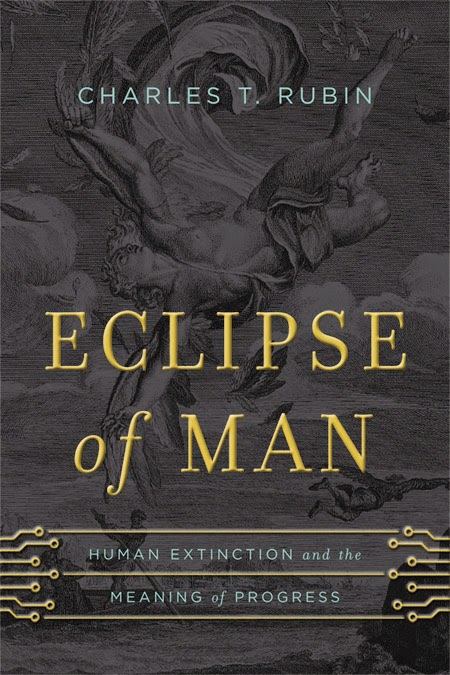 We’ll have much more to say about the book in the days and weeks ahead, but for now, you can read the dust-jacket text and the book’s blurbs at EclipseOfMan.net and, even better, you can buy it today from Amazon or Barnes and Noble.

Peter Singer, along with researcher Agata Sagan, recently made an appearance on the philosophy blog of the New York Times. Suggesting the need for a “morality pill” that could boost human ethical behavior, Singer reminds us why he is the king of crass consequentialism:

Might governments begin screening people to discover those most likely to commit crimes? Those who are at much greater risk of committing a crime might be offered the morality pill; if they refused, they might be required to wear a tracking device that would show where they had been at any given time, so that they would know that if they did commit a crime, they would be detected.

As long as we’re asking people to take morality pills, we might as well preemptively implant those we deem pre-criminals with tracking devices, right?
Singer’s ideas about moral enhancement, however, pale in comparison to those of Julian Savulescu, who drops even the rhetorical semblance of doubt as to whether moral enhancements ought to be compulsory. Indeed, he seems to believe that without the development of genetic or other biomedical methods for moral enhancement, the human race is doomed to extinction.
Savulescu, a professor at the Oxford Uehiro Centre for Practical Ethics, and one of the most prominent academic advocates of human biological enhancement, has argued that the human race is “unfit for the future,” and is heading into a “Bermuda Triangle of Extinction.” The three points of this triangle (representing the three factors pulling us toward extinction) consist of our rapidly advancing technological and scientific power, the evolutionary origins of our moral nature, and our commitment to liberal democracy.
The moral nature we received from our ancestors is far from perfect, rooted as it is in a world of supposedly violent and xenophobic cavemen. With the development and dispersal of powerful new technologies, it is becoming increasingly likely that powerful weapons, like genetically engineered super-plagues, might end up in the hands of people whose moral nature disposes them to violent, possibly catastrophic acts. Liberal democracy is represented in the triangle because it prevents us from taking the measures necessary to ensure the survival of the human race — measures like compulsory moral enhancement.

The idea of using genetic engineering as a measure to secure global security or peace is, hopefully needless to say, totally removed from medical, scientific, and political realities — not to mention from basic ethical and practical concerns. The idea of actually implementing such a scheme, effectively and successfully, is laughable.
Since facts don’t play much of a role in these proposals, consider just one small bit of relevant data. In Afghanistan — a country that would be high on the list as a potential source of troublesome weapons or people — the infant mortality rate in 2009 was over 13%, and one in five children died before the age of five. Even from a purely practical standpoint, are we to take seriously the idea of going into country that lags a century behind today’s medical standards, and undertaking a massive program of chemical or genetic manipulation, using techniques that are as of now barely hypothetical, targeting genes that we have barely begun to identify, on “patients” who are unlikely to understand the procedures, and in any case will almost certainly be coerced into them?
While it is true that our moral dispositions are to some extent rooted in our biology, our moral and political actions are rooted at least as much in our beliefs about justice and injustice as in our innate dispositions. And one would think that just about any society would not take kindly to an attempt to violate its members’ bodily autonomy. Even if the technical and medical problems were somehow miraculously solved, the fact that some state or international agency would have to force people to take these “moral enhancements” — as Savulescu notes, those who most “need” them would be the least likely to take them voluntarily — would create a backlash that would almost surely inspire more violence than the intervention could possibly prevent.

The apparent failure of transhumanists to recognize the basic political problems with such a scheme makes plain some of the lapses in their understanding of human nature. Savulescu’s argument that human beings are “unfit for the future” reflects an anxiety common among many people — not just transhumanists — who think about how messy and imperfect our biological nature can be. Evolutionary biology seems to show us that our bodies were designed to compete in a vicious, pre-historical struggle, burdening us with desires and vices that conflict with our higher longings and our moral values.
But this insight is of course not new; Plato and the authors of Genesis seemed to have some notion that human nature is prone to bad as much as good, and common sense shows that we are not always as good as we would like to be.
The difference between transhumanists and more serious ethical traditions is that transhumanists think that because nature is not perfectly designed, it is completely up for grabs — while others acknowledge that ethics is about learning the best way to live with our natural imperfections. In this sense, trying to eliminate the aspects of our nature we don’t like would not be a moral “enhancement,” but would rather be a profound change in the meaning of a moral human life.