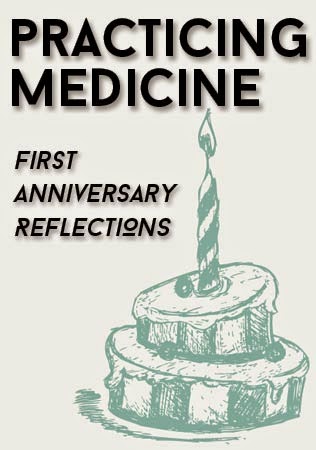 As I look back on the first year of this blog and reflect on my four years of medical school, I am amazed at how much I have learned and how much
I have seen. All of it has informed what I have written about here on Practicing Medicine. And many of the issues I have raised remain vital to my experience within the hospital.
Medicine forces physicians to ask questions; questions beyond which IV fluids to give or which antibiotic to use. Medicine demands that we ask the same
questions that any student of human history might ask: What makes us human? What is so humorous about human suffering and pain? Why
do we become numb to human forms of suffering? What is the process by which we die? And is it dignified?

How should we view the place of the mentally ill in our society?

I have also made other, perhaps less broad and less grand, attempts at explicating the practice of medicine. My first post explained why I decided to blog and the awkward place
of medical students within the medical field. This piece
discussed the potent smells of the hospital — they are unavoidable and yet we adjust to them. Stepping into the ED for the very first time, I
explained how a trauma code works and the horrors that
trauma patients face. The kidney-failure patient also faces difficulties,
but they are of a chronic nature due to dialysis, a miracle of modern science with its own drawbacks.

I compared
George Orwell’s experiences in a French hospital in the early twentieth century to my own experiences in a hospital in the early twenty-first; yes, there are major differences, but there are also similarities. This is a pragmatic post on how we ought to think about
scientific studies and evidence-based medicine. I have written about depression and schizophrenia. And, in a more recent post that would have
pleased me greatly as a younger reader, I wrote about Sir Arthur Conan Doyle’s eponymous detective, Sherlock Holmes — it turns out his methods are relevant to physicians today.

Over the next year I hope to continue to write about the big questions and bring up others in relation to what I see and do. I also have a few bigger writing projects in the works, which I will mention here on the blog. If you have suggestions or
comments, please feel free to send them my way. My e-mail address and Twitter handle can be found at the right.

Can storied urn or animated bust
Back to its mansion call the fleeting breath?
Can Honour’s voice provoke the silent dust,
Or Flattery soothe the dull cold ear of Death?
— Thomas Gray, “Elegy Written In a Country Churchyard”

The graveyard shift, or overnight shift, in the hospital is a singular experience — quietude envelops the bare hallways. Phones and pagers echoing throughout the day go (mostly) silent; social workers or teams of residents and medical students do not round from patient room to patient room; and there are no visitors carrying food from the cafeteria to their ailing loved ones. It almost seems as if human sickness has been put on hold, as if each patient’s cells just paused overnight in order to sleep and resume activity again the following day. This false sense of peace deceives newly minted third-year medical students. Just because human beings evolved to sleep at night does not mean the pathology of disease stops. No, a cancer cell cares little about the time of day and viruses disregard our circadian rhythm. And that’s why there is the night shift — that’s why medicine must never sleep. Sometimes, it takes dramatic events to remind one of this.

I remember the eerie robotic voice over the hospital loudspeaker: “code blue, code blue.” In hospital lingo, a “code” is an alert in a hospital, and “code blue” is a common indication that a patient in the hospital is dying and needs help immediately. Physicians, nurses, or other healthcare workers trained in CPR (Cardiopulmonary Resuscitation, used to revive a patient whose heart has stopped) rush to the room to help the patient. When a code is called, everyone knows his or her role. A code leader directs the administration of medications (usually epinephrine to help increase cardiac activity); a respiratory therapist manages the airway, making sure that air is flowing into and out of the lungs; a nurse ensures good intravenous (IV) access in the patient’s arms for the administration of drugs into the blood; and another team member compresses the patient’s chest to force the heart to pump blood throughout the body.

That night, a patient with a terrible history of visits to the intensive care unit due to infections and disease had gone into cardiac arrest. And as the two third-year medical students on our night shift, one of my classmates and I were coincidentally on the same floor as the patient. Several physicians and nurses were already by the patient’s side when we got there. A nurse ushered us into the small room to perform chest compressions on the deceased woman (medical students assist the code team in fulfilling whatever role they assign us). We edged into the room, approximately 8’x11′, trying not to bump into the hospital staff. The massive “code cart” lay by the foot of the bed, its drawers half open with torn bags, empty boxes, and medication vials which were used when the code began. There were eight or nine other people in the room, as well as the patient. She was lying face-up on the bed, half covered in a hospital gown, breasts revealed, an oxygen mask over her face to help move air into and out of her non-autonomous lungs, head tilted to the side, eyes blankly staring beyond the wall of the room. I didn’t know what to do or how to react, but there was no time for being pensive as we rushed to the side of the bed.

We began chest compressions. The technique is straightforward: put one hand over the other, stand almost directly over the patient’s chest, and “push hard, push fast, and allow for good chest recoil” according to protocol. This replicates the rhythmic beating of the functional heart and allows for it to fill with blood as the chest expands much like a sponge soaking up water after being released. The heart, however, is protected by some of the chest bones (rib cage and sternum). And CPR is no gentle process. Upon pushing down, one feels the ribs being so forcefully compressed that they crack, a common manifestation of this physical maneuver.

As we compressed, this poor woman would bounce up and down in the bed because of the force. We took turns compressing when we became too exhausted to continue. Meanwhile, the respiratory therapist pushed oxygen into the woman’s lungs through the mask, the nurses administered epinephrine via the IV every three to five minutes, and the others looked on in silence. Nobody said a word for the entire time this went on unless it pertained to how much medication to give the patient or when to administer a shock with the defibrillator. Occasionally, we ceased compressing and felt for a pulse but each time there was no rhythmic beating of the blood in her arteries. Despite the team’s efforts, more and more of the patient’s cells swelled and burst due to lack of oxygen; one after the other; millions upon millions irreversibly perishing.

Eventually, after determining that no strand of hope remained, the physician called the patient’s time of death. As quickly as CPR had begun, it also concluded. We stopped compressing. The respiratory therapist removed the oxygen mask and shut off the oxygen tank. The nurses packed up the code cart. The physician covered up the woman’s chest with a blanket. The medical team dispersed into the desolate hallways to care for other patients, leaving the nurses on the hospital floor to make arrangements for the patient’s body. As participants in the evening’s tragedy, we left to wander the halls and somehow come to terms with the suddenness of what happened and what we had just done.

Thinking back on that disquieting evening, I am reminded of the famous and oft-quoted poem that Dylan Thomas wrote in preparation for his father’s death — “Do Not Go Gentle into That Good Night.” The wonderful audio recording of Thomas reading the poem is here and you can read the text here:

Do not go gentle into that good night,
Old age should burn and rave at close of day;
Rage, rage against the dying of the light.

Though wise men at their end know dark is right,
Because their words had forked no lightning they
Do not go gentle into that good night.

Good men, the last wave by, crying how bright
Their frail deeds might have danced in a green bay,
Rage, rage against the dying of the light.

Wild men who caught and sang the sun in flight,
And learn, too late, they grieved it on its way,
Do not go gentle into that good night.

Grave men, near death, who see with blinding sight
Blind eyes could blaze like meteors and be gay,
Rage, rage against the dying of the light.

And you, my father, there on the sad height,
Curse, bless, me now with your fierce tears, I pray.
Do not go gentle into that good night.
Rage, rage against the dying of the light.

Thomas pleads with the dying to take arms against death that comes too soon. And this is how we think about issues like death and disease. The late Christopher Hitchens, while being treated for cancer, observed, “those other glorious ‘wars,’ on poverty and drugs and terror, combine to mock such rhetoric, and, as often as I am encouraged to ‘battle’ my own tumor, I can’t shake the feeling that it is the cancer that is making war on me.” The metaphor of a war against cancer or a war against death is misplaced. We have less control than we wish. We are at the mercy of the virulence of a disease, the sequence of our genome, or the power of modern medicine, not always of our own strength or desire to live. Moreover, the dead and dying do not rage or fight. Our dying patient that night probably felt, for an instant, the inability to breathe, an intense pain in her chest, a drastically elevated heart rate — and then, immediately after, nothing.

We, the living, fight death on behalf of the dead. We take up Thomas’s plea. We compress chests, we pump air, we deliver electric shocks and medications to try to restart the patient’s heart. We did not let her go gently into that good night. We fought her fight as if it were our own. But the sheer humiliation and vulnerability of the patient during this event makes one question how much of this battle should be fought. How much do we honor this person’s memory by pounding on her chest as she lies half naked in a room filled to capacity with strangers? Yes, it seems cruel. And yet, we rightfully value human life above all else and thus owe the patient every weapon in this battle. While the rapidity of the process may seem callous, it is essential in a last-ditch effort to stave off eternal rest. After all, what if she had been revived?