The one great impression I have from this much-lauded film — which I just got around to watching — is how imperceptive, and even incurious, it is about what makes Calvin and Hobbes the best of its genre. There are a good many vague mumbles about its being well-drawn and well-told, and imaginative, and “intimate” (whatever that means), and so on and so forth.

The film doesn’t seem to know what it’s about: the history of cartooning? The death of newspapers? Chagrin Falls, Ohio? The promise and peril of marketing?

So let’s try to get a grip on the question of the strip’s greatness. Calvin and Hobbes is about finding freedom within structures of constraint, and being able to do so through the strength that comes from knowing that you are unconditionally loved and perfectly understood, even, or perhaps especially, when the one who understands you perfectly sees your flaws and foibles as well as your charms and virtues.

The strip is therefore concerned with the interaction of complex forces that are always in tension with one another, which requires a standard visual style that is highly energetic and the creation of multiple secondary visual styles in order to illuminate particular points at which those forces intersect.

That’s enough to get us started, I think.

I recently stopped reading the much-acclaimed comic The Manhattan Projects largely because of its mindless violence — and I really do mean mindless: a ceaselessly repetitive proliferation of amputations, decapitations, and (especially!) acts of cannibalism that do nothing to advance the story or contribute to characterization but rather profoundly retard both. I do not like violence in art but can accept it when it has a purpose; in this case the mindlessness results from writers and artists having decapitated their own critical faculties, leaving them subject to the residual twitchings of their nervous systems. Page after page, the doltishness piles up and piles on.

But before I rescued my own brain from further neuronal degradation, I couldn’t help noticing that The Manhattan Projects exemplifies a weird cultural archetype: a version of the comic-book science hero that demonstrates its respect for real-life scientists by turning them into action figures.

The term “science hero” is associated with Alan Moore, but while there are countless instances in the comics literature, the figure that has done the most to fix the archetype in our minds is Reed Richards of the Fantastic Four. Richards is a scientific super-genius who happens to acquire superpowers but is also incredibly rich — an almost universal theme in the science-hero genre, one picked up in an especially dramatic way in Nowhere Men, another story-in-progress from Image Comics, whose tagline is “Science is the new rock-and-roll.” Its Fab Four protagonists, research scientists who created the biggest company in the world, are basically the Beatles crossed with Steve Jobs.

But though the science hero typically enjoys fabulous wealth, what makes him — of course it’s almost always “him” — a true science hero is that he acquires it, as the British were said to have acquired their Empire, in a fit of absent-mindedness: it just kinda happens. Which perhaps explains why the paradigmatic real-life science hero is Nikola Tesla, who made money only intermittently and died poor, as opposed to Thomas Edison, whose sharp and occasionally unethical business practices made him almost as rich as Reed Richards. (This very contrast is at the heart of the well-known — and highly inaccurate — Tesla-as-über-geek post at The Oatmeal.) In one of the most enjoyable current comics series, Atomic Robo, Tesla gets his fortune posthumously, as it were, through his creation of the series’ titular sentient robot; and many other entertainments work similar territory, as a brief look at the “Tesla in popular culture” Wikipedia page reveals. It’s noteworthy, in light of the portrayal of scientists as rock stars in Nowhere Men, that in the film The Prestige Tesla is played by, yes, an actual rock star, David Bowie.

In The Manhattan Projects most of the famous scientists are skilled — or maybe natural-born — killers. (Pro tip: don’t mess with Einstein or Robert Oppenheimer. They’ll take you out.) And they have access to an unlimited supply of money. Sure, this is a comic book, and much of this is being played for (sick, perverted) laughs, but it suggests what consumers of this genre really admire. Who really cares about Indiana Jones’s anthropological research? — well, except for his tenure committee, of course.

In some ways this kind of thing is unavoidable, especially in a society that has for many decades now — at least since the height of the Cold War, when popular magazines regularly praised our scientific leaders, like Werner von Braun and John von Neumann, for protecting us against commie nukes — wanted to think of itself as Believing in Science without actually knowing any science. So we make our scientists into the kinds of people we already admire on wholly other grounds — thus creating a new caricature that’s not any closer to reality than the older caricature of the absent-minded professor.

Not that closer-to-reality is everything, but…. A few years ago my wife and I were on a hiking vacation in British Columbia and happened to eat breakfast with the same couple, the only other guests, three mornings in a row, which naturally led to some chatting. The woman was friendly and talkative, the man friendly and quiet, shrugging apologetically at the kinds of vacations he had been subjecting his wife to over the years. (“I like to sleep in tents.”) Only on the third day did I learn that he was Peter Goldreich, a very distinguished astrophysicist. He didn’t say much about his work, but I remember his commenting that he could do it anywhere, since he only needed a pencil and a legal pad. It just might be worth our while to exercise our imaginations in an unfamiliar way, so as to entertain the thought that exceptional works of science are getting done all the time, even in this digital age, by unassuming, ordinary-looking people who kill no aliens, who lack fabulous wealth, and who do their best work with a pencil and a legal pad.

I just finished reading Bone — all 1300 pages of it. It was okay, I guess. The usual cod-Tolkienian stuff, with the slight twist that the hobbits are Pogo characters. Well-enough told, but . . . meh.

I’ve been reading a number of comics-slash-graphic novels, and too many of them are trying to do in comic form what word-only forms (novels, essays) do better. There’s really no point to a graphic story in which the visual element isn’t pulling a heavy load of meaning and mood. Too often you have art that isn’t doing a lot except, perhaps, to conceal how drearily familiar the story is.

But a fine example of art that contributes mightily to the character and power of the storyis Asterios Polyp, which would be a fantastic book were it not marred by an utterly ridiculous ending. I get annoyed every time I think about it. But until that ending, the book is a great example of visual storytelling. 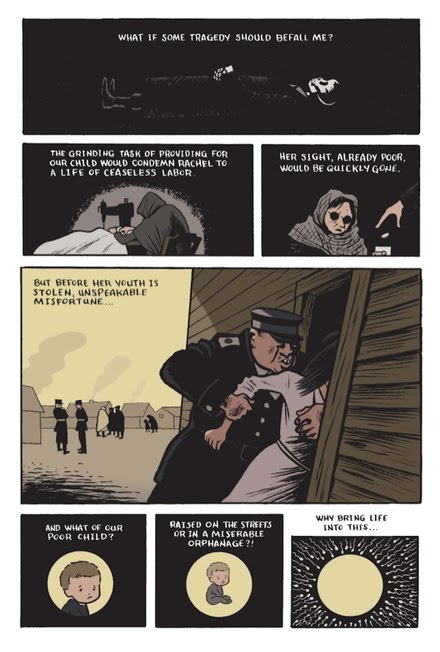 To me, James Sturm’s Market Day provides a far more compelling visual world than David Small’s Stitches. It is beautiful and memorable. But even so, the story leaves something to be desired. Sturm tells the story of a rug-weaver who takes his wares to market but by the end of the day has, it seems, completely changed his life. The problem is that there just aren’t enough . . . well, words to explain this change. There’s no doubt that Mendelman suffers some serious jolts during what he had expected to be a commonplace visit to a nearby market town, but are those jolts really sufficient to cause him to throw over his life’s work, his beloved vocation? Would any man so dedicated make so dramatic a decision so quickly? It’s not impossible — but it’s not at all likely. We need to learn more about Mendelman in order to decide whether his catastrophe makes sense. I think we also need more background, in Mendelman’s character and in the culture, to account for the descent into obscenity that he suffers near the end of the story.
There are some things pictures do better than words: Sturm creates with remarkable power the materiality of the old world of Eastern European Jewish culture. But other things words do better than pictures: Mendelman’s delicate psychological state is something that can’t be rendered fully and effectively without more language. Or so it seems to me.
It’s a very worthwhile book all the same. I want to emphasize that in case he sees this, because he told Amazon that he started his recent internet fast in part because of his responses to (amateur and professional) reviews:

In some ways, Market Day was the reason I went offline. I can get obsessive sometimes when I’m online, and I knew if I had a book out, I’d be looking at my Amazon ranking, and I’d be re- reading interviews, and, you know, “What does Chewbacca45 think of my book?” Like Mendleman, every one of those things would be either an ego puff, or a little arrow. As I’ve gotten older and done a few books now, I’ve realized how fleeting this moment is…and by not being online, I feel like I can enjoy this very brief window. I feel like I have a healthier relationship with the book. 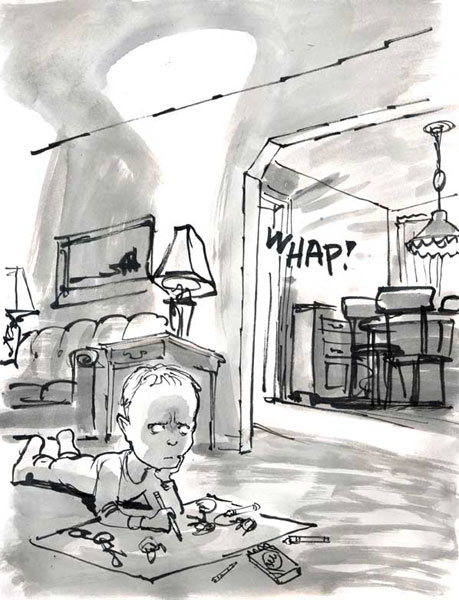 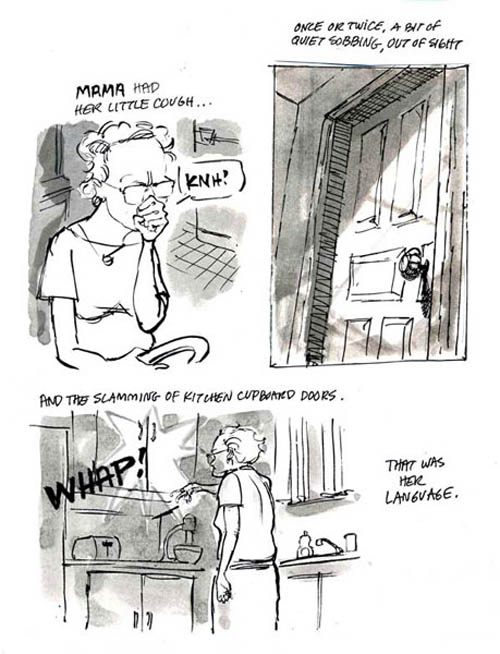 Text people — my tribe — tend not to get graphic stories. Or we struggle to get them. We zip through a whole book in less than an hour and feel cheated. “This could have been a short story!” “I bet the whole book doesn’t have more than a couple of thousand words.”To respond in this way is of course to miss the point. If you’re not allowing yourself to be absorbed into the book’s visual world — if your eye is passing as quickly as possible over the images in order to get to the next words — then you’re not experiencing the book as it was meant to be experienced. In a very meaningful sense, you’re not reading it at all.That said, the artist needs to create a fully-realized visual world for the reader to enter. When that happens, you don’t think about the slightness of the story, the paucity of words, because so much is being communicated by the images that the story feels full. I didn’t like Persepolis all that much, largely because I find the character of the young Marjane Satrapi neither interesting nor attractive, but I thought the world she created with her images a very rich one.By contrast, David Small’s Stitches felt slight to me, the story sketchy and without much nuance, because I didn’t feel that the images conjured up a whole world. The book has been greatly praised, so it’s likely that I’m missing something, but to me the story largely felt like an act of vengeance against Small’s parents, especially against his mother. And while she very well may have deserved his anger, I think most readers tend to sympathize with a narrator more when there seems to be an attempt at fairness — even when the point of the book is to dramatize Small’s experience at the time. Small adds a note at the end, with a photograph of his mother, that suggests a more complex story, but it’s not there in the narrative itself, and I think that’s a problem.But if the book’s visual world were more compelling to me, I’m not sure I would feel this way: I might be experiencing the terror of young David Small’s world so fully that I wouldn’t be standing back and judging. Your mileage, of course, may vary.(You can read an excerpt from Stitches here.) (And I’ll have thoughts on another graphic story tomorrow.)